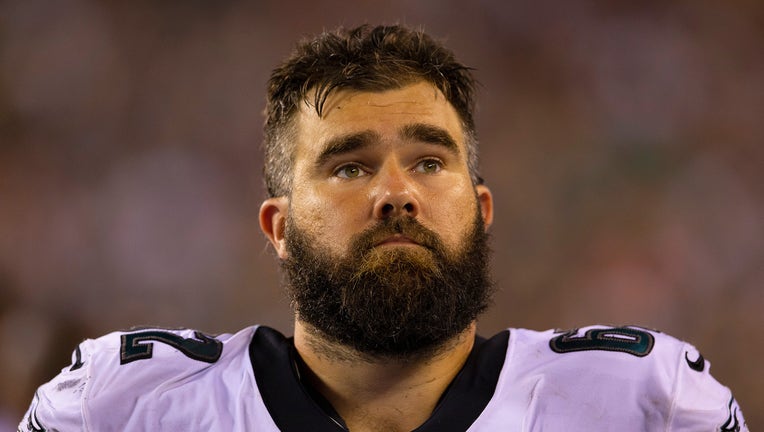 Jason Kelce #62 of the Philadelphia Eagles looks on against the Baltimore Ravens in the preseason game at Lincoln Financial Field on August 22, 2019 in Philadelphia, Pennsylvania. (Photo by Mitchell Leff/Getty Images)

PHILADELPHIA - Jason Kelce is calling it a career - as far as his arm wrestling career is concerned.

After openly considering retirement over the last few offseasons, the Eagles center and renowned public speaker, assured fans he would be returning to the field next season.

However, Kelce had a little fun at the expense of Eagles fans in the process.

Kelce took to Instagram with a photo of him arm wrestling a fan in a bar that went viral earlier in the offseason.

Athletes, celebrities join 'All in challenge' to fight hunger amid coronavirus pandemic

The caption reads in part:

“Until now I haven’t address[ed] my future because I have been mulling it over for some time this offseason. I wanted to allow my body and mind to fully recover from the rigors of an NFL season, and take time with my family to see what lies ahead. After thinking long and hard about this I have come to a decision. I have decided to RETIRE... from arm wrestling. I leave behind a 2-0 record, one win against this man, and the other being against Claude Giroux and want to go out on top.”

Kelce goes on to add that he is excited for the upcoming 2020 NFL season and will be “out there with my teammates, coaches and hopefully fans this coming season.”