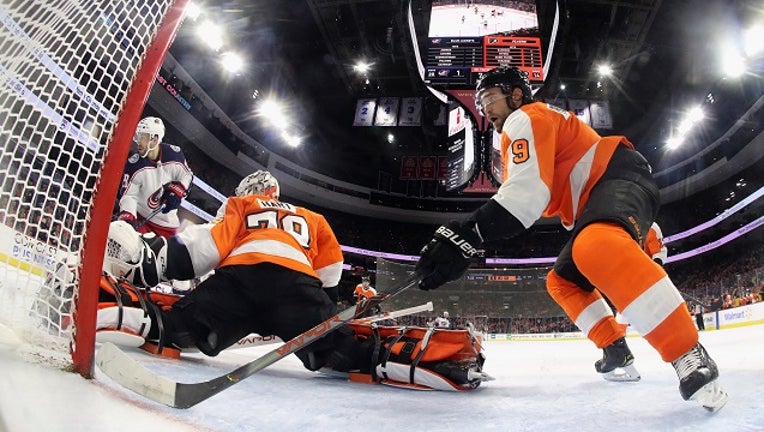 PHILADELPHIA - Travis Konecny had a goal and two assists, and the Philadelphia Flyers beat the Columbus Blue Jackets 5-1 Tuesday night.

Kevin Hayes, Sean Couturier, Philippe Myers and Jakub Voracek also scored for the Flyers (33-20-7, 73 points), who moved a point ahead of Columbus (30-19-12, 72 points) and into third place in the Metropolitan Division with the win.

Philadelphia won despite setting a season low with 15 shots on goal. The Flyers' Carter Hart stopped 28 of 29 shots.

The game was the first of a home-and-home set, with the Blue Jackets hosting Philadelphia on Thursday night.

Konecny scored his team-leading 20th of the season on a deflection 3:40 into the third period to make it 4-1. Blue Jackets coach John Tortorella pulled goalie Elvis Merzlikins after the tally for backup Matiss Kivlenieks.

“We didn’t get a lot of pucks on net, but we took advantage of our opportunities,” Konecny said. “There’s definitely some areas we can clean up. Going into the next game, I’m sure that they know their best effort wasn’t there and ours wasn’t there either. So, it should be a good matchup.”

Oliver Bjorkstrand scored for the Blue Jackets, who lost their sixth straight. Columbus has earned points in three of those defeats.

“I don’t think we played a bad game, certainly not a 5-1 game, but we need to continue to remind ourselves how we have to play,” Tortorella said. “I’m not worried about (confidence). We have the proper mindset of how we’re trying to approach this and we’ll get ready to play the next game.”

It was 5-1 when Voracek scored from a sharp angle on the power play with 9:46 remaining. Claude Giroux assisted the power-play goal to become the franchise’s assist leader on the man-advantage with 235.

Philadelphia went ahead 3-0 with 7:28 left in the second when Myers sent a pass to the net that caromed off Columbus defenseman Andrew Peeke.

The Blue Jackets got on the board with 2:39 remaining in the period when Bjorkstrand got his team-leading 20th of the season on a power play when his wrist shot from the slot beat Hart on the glove side. It was the sixth goal in 11 games for Bjorkstrand.

The Flyers scored the only two goals of the opening period.

Hayes gave Philadelphia a 1-0 lead 3:28 into the contest when his shot from the right side of the net bounced off Peeke before going off Merzlikins’ mask.

Peeke also was in the middle of Philadelphia’s second goal, which came just 1:02 later. The Blue Jackets defenseman whiffed on his attempt to stop Giroux’s outlet pass, which went through Peeke’s legs and on the stick of Couturier. Couturier scored on the breakaway with a slick move where he slid the puck through Merzlikins' legs with a forehand shot while faking to his backhand.

“We were able to capitalize on a couple of opportunities,” Flyers coach Alain Vigneault said. “At the end of the day, you have to capitalize, which we did. You have to go to the net. We went to the net and pucks found a way to get in.”

Philadelphia also had a goal disallowed in the opening period on a coach’s challenge as officials ruled that Joel Farabee interfered with Merzlikins on Ivan Provorov’s deflection that entered the goal with 4:52 left in the first.

NOTES: The Blue Jackets continued to be without their top goalie, defenseman and forward. G Joonas Korpisalo (lower body) hasn’t played since Dec. 29; D Seth Jones (fractured ankle) and F Cam Atkinson (ankle) were both hurt Feb. 8. Jones is expected to miss 8-to-10 weeks while Atkinson is out 2-to-3 weeks. ... Philadelphia improved to 20-5-4 at home. ... The Flyers also won the first two games of the season series, 7-4 at home on Oct. 26 and 3-2 at Columbus on Nov. 27. Thursday will wrap up the four-game season tilt.

Flyers: At Columbus on Thursday.