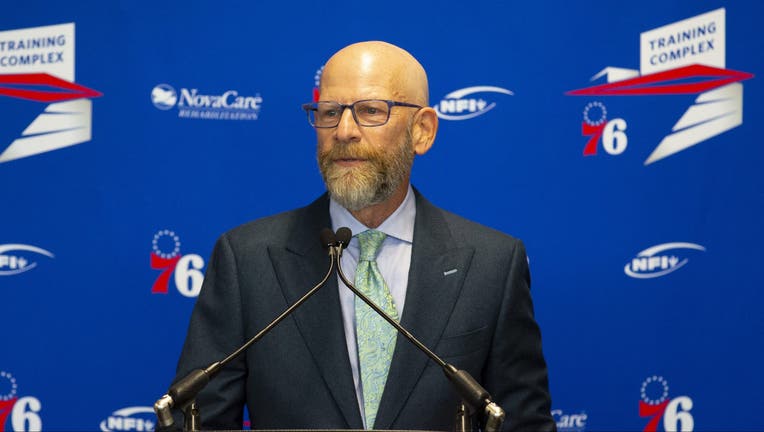 Play-by-play announcer Marc Zumoff of the Philadelphia 76ers speaks at the podium prior to the team unveiling a sculpture to honor Charles Barkley at their practice facility on September 13, 2019 in Camden, New Jersey. (Photo by Mitchell Leff/Getty I

PHILADELPHIA - The Philadelphia 76ers are congratulating longtime broadcaster and Philadelphia native Marc Zumoff on his retirement from sports broadcasting.

Zumoff announced his retirement in a letter to the fans on Tuesday after a 27-year run as the team's play-by-play announcer.

During that run, Zumoff called more than 2,100 76ers games across the regular season and playoffs, and across some of the most exciting seasons in team history.

He also served as the voice behind the careers of 76er stars, from Allen Iverson to Joel Embiid.

"We sincerely thank Marc Zumoff for all he’s done for this organization, this team and the city of Philadelphia over the last 27 years," Philadelphia 76ers Managing Partners Josh Harris and David Blitzer said. "We’ll miss his iconic voice and trademark sayings, which have been staples during 76ers games for the better part of two decades. While we congratulate Marc on his retirement, we look forward to properly honoring and celebrating him at a home game during the 2021-22 season."

After graduating from George Washington High School and Temple University, Zumoff joined PRISM in 1982 and served as the in-studio host for pregame, halftime and postgame shows. He was named the play-by-play announcer on August 17, 1994 and went on to win the Mid-Atlantic Emmy Award for best sports play-by-play broadcaster 19 times.

The 76ers plan to celebrate Zumoff at a home game during the 2021-22 season. The organization says further details regarding "Marc Zumoff Night" at The Wells Fargo Center will be distributed at a later date.