“If we want to talk about the ideals that we stand for and, ya know, the songs and the anthem and sort of what we were founded on, I think I’m extremely American.”

LYON, France - Soccer superstar Megan Rapinoe of the U.S. Women’s National Team, has a message for those calling her anti-American: “I think that I’m particularly and uniquely and very deeply American.”

The USWNT co-caption, 33, came under scrutiny last week when a video circulated of an interview she gave to Eight by Eight Magazine this January, during which she was asked if she was excited about the prospect of going to the White House.

President Donald Trump then targeted Rapinoe in a Tweet, saying, “Megan should never disrespect our Country, the White House, or our Flag, especially since so much has been done for her & the team. Be proud of the Flag that you wear. The USA is doing GREAT!”

In a press conference Thursday, Rapinoe stood by her original comments, but “with the exception of the expletive. My mom would be very upset about that.”

Rapinoe, who has also come under fire for not singing the national anthem at the beginning of her matches, had an opportunity Wednesday to respond to her critics when a reporter from Pro Soccer USA asked her what she would say to those who continue to call her views and actions anti-American.

“I think that I’m particularly and uniquely and very deeply American,” Rapinoe began, “If we want to talk about the ideals that we stand for and, ya know, the songs and the anthem and sort of what we were founded on, I think I’m extremely American.”

It’s not the first time Rapinoe’s patriotism has been questioned. She received significant backlash in 2016 when she was the first white athlete to kneel during the national anthem at a sporting event after Colin Kaepernick began doing so as a protest.

Now, Rapinoe is asking those who question her patriotism to examine her words and actions more closely, arguing, “Maybe you don’t agree with every single way that I do it, and that can be discussed; I know that I’m not perfect. But I think that I stand for honesty and for truth and for wanting to have the conversation, and for looking at the country honestly and saying, yes, we are a great country and there’s many things that are so amazing, and I feel very fortunate to be in this country. I would never be able to do this in a lot of different places, but also that doesn’t mean that I can’t get better. It doesn’t mean that we shouldn’t always strive to be better. 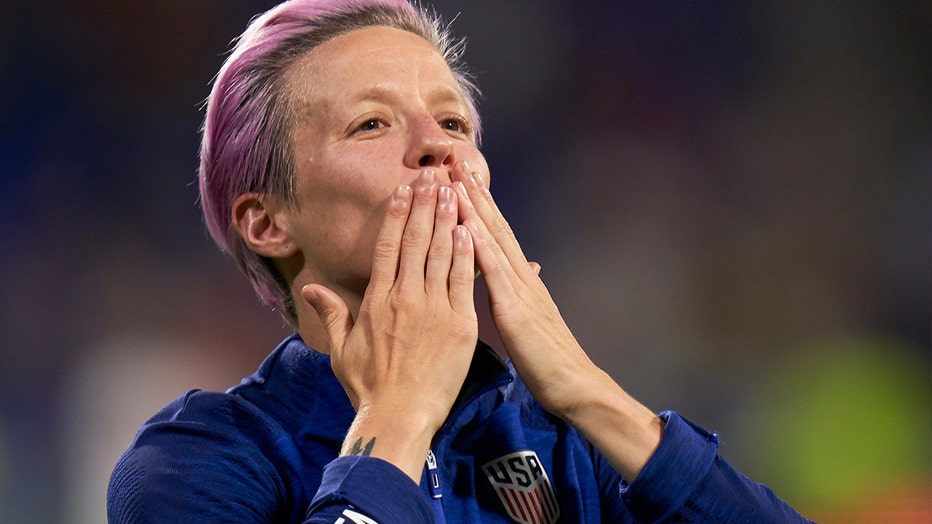 ”“I think that this country was founded on a lot of great ideals,” she continued, “but it was also founded on slavery, and I think we just need to be really honest about that and be really open in talking about that so we can reconcile that and hopefully move forward and make this country better for everyone.”

Since Trump’s tweet, other members of the USWNT have made public comments that they, too, will not be visiting the White House if invited.Ali Krieger refused a potential White House invitation via Twitter in response to Trump’s tweet at Rapinoe.

Alex Morgan told Time Magazine last month that she doesn’t support a lot of what the Trump administration is doing and would also skip a trip to the White House.

“There’s the narrative that’s been said hundreds of times about any sort of athlete who’s spoken out politically. ‘Stick to sports,’” she told Time, “We’re much more than that, OK?”