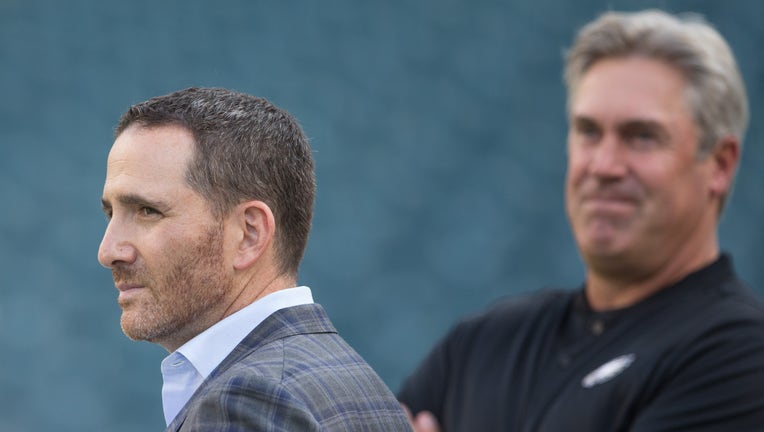 General manager Howie Roseman of the Philadelphia Eagles and head coach Doug Pederson look on prior to the preseason game against the Pittsburgh Steelers at Lincoln Financial Field on August 9, 2018 in Philadelphia, Pennsylvania. (Photo by Mitchell L

PHILADELPHIA - The need for a wide receiver is obvious and the talent level at the position in next week’s NFL draft is deep. So the expectation is the Philadelphia Eagles will select a guy to catch Carson Wentz’s passes in the first round.

“You don’t want to get in a situation where you force things,” personnel boss Howie Roseman said Thursday. “Obviously, it’s human nature when you see a hole on your roster or a position you want to upgrade to feel like you are going to use this opportunity to do just that. But you don’t want to compound the problem by making a pick that doesn’t really help and I think we’ve shown that after the draft there’s going to be opportunities to improve our team, whether it’s in May, August or in the season. We don’t look at the draft as the last opportunity to improve our team.”

The Eagles have eight picks after trading a pair to Detroit to get three-time Pro Bowl cornerback Darius Slay. They have the 21st overall pick, one in the second round (No. 53), one in the third (No. 103) and three more in the fourth.

Lamb, Jeudy and Ruggs III won’t be there at No. 21, so Philadelphia would have to trade up.

Roseman is among the most active league executives, moving up or trading down.

“I think we just kind of look at the value of the player, where the board drops off,” he said. “If we see a big gap and there’s a big drop-off, then we’ll look at that. If we feel like there’s a group of guys that we really like, that we can choose from, then we’ll probably stay put or move back.”

The Eagles had major issues at receiver last season when DeSean Jackson, Alshon Jeffery and Nelson Agholor combined to miss 24 games. Second-round pick J.J. Arcega-Whiteside stayed healthy but struggled mightily to produce as a rookie, catching 10 passes. Greg Ward came off the practice squad and ended up the team’s most reliable wideout down the stretch as Philadelphia won the NFC East.

“We don’t want to get ahead of ourselves, and say just because there’s a perceived position of strength, that that’s where we are going to choose from,” Roseman said.

If the Eagles pass on receiver in the first round, they could choose an edge rusher, a position Roseman has always valued. Four of his eight first-round picks have been defensive linemen. The team also has needs in the secondary and linebacker. Philadelphia hasn’t selected a linebacker in the first round since Jerry Robinson with the 21st pick in 1979.

The Eagles traded up in 2017 to select defensive end Derek Barnett at No. 14. Barnett played a key role his rookie season when the Eagles won the Super Bowl and had a career-high six sacks last year. Veteran Brandon Graham starts on the opposite side. He had 8 1/2 sacks last season. The Eagles like to rotate their ends and also have Josh Sweat, Shareef Miller and Genard Avery. If they pursue a pass rusher in the first round, LSU’s K’Lavon Chaisson, Penn State’s Yetur Gross-Matos and Iowa’s A.J. Epenesa are possibilities.

The Eagles could buck their long trend and take Oklahoma LB Kenneth Murray or LSU’s Patrick Queen at No. 21. Philadelphia released Nigel Bradham, the team’s best linebacker for the past several seasons. Kamu-Grugier-Hill, who started six games last year, signed with Miami. Nate Gerry is a returning starter, Jatavis Brown was signed from the Chargers, and T.J. Edwards, Alex Singleton and Duke Riley are in the mix. Queen or Murray would be a significant upgrade.

A defensive back isn’t a pressing need in the first round after the trade for Slay. Safety Will Parks and cornerback Nickell Robey-Coleman signed in free agency and Jalen Mills is returning and moving to safety to replace Malcolm Jenkins. Cornerback Ronald Darby is also gone.