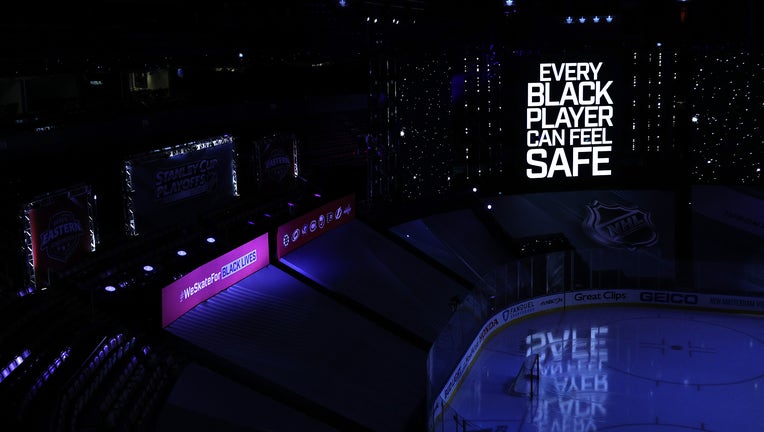 TORONTO, ONTARIO - AUGUST 29: A message stating "Every Black Player Can Feel Safe" is displayed on the video screen, as the NHL addresses racism, in light of the recent events in Kenosha, Wisconsin, in regards to the shooting of Jacob Blake, prior to

TORONTO - The NHL playoffs took a two-day break to protest racial injustice, the latest twist in an unprecedented, pandemic-halted season.

Now it’s back to the ice.

Three second-round playoff series resume Saturday after NHL players joined athletes in sports leagues across the country in protesting the latest shooting of an unarmed Black man by police.

The NHL played three games Wednesday after video surfaced of Jacob Blake being shot in the back seven times by police in Kenosha, Wisconsin.

The NHL then opted hit the pause button for a second time this season on Thursday and Friday, postponing four games in protest of racial injustice. That pushed everything back into the weekend.

Tampa Bay and Boston play Game 4 and the New York Islanders and Philadelphia play Game 3 in the Eastern Conference’s Toronto bubble. The Western Conference series between Vegas and Vancouver also fire back up in the Edmonton bubble with Game 3.

The Flyers would have had a lot of momentum heading into Game 3 on Thursday after beating the Islanders 4-3 in overtime Wednesday night.

After the two-day break, they’ll have to find their mojo again in the biggest swing game of the series.

“I think each game obviously presents a unique and different challenge. and we’re all professionals here,” Flyers LW James van Riemsdyk said “When the games come and arrive at the rink, we’re ready to go and put forth all our effort and attention into playing the game and having a good result.”

New York won the opener 4-0 behind Semyon Varlamov, who stopped 29 shots to become the first Islanders goalie with consecutive playoff shutouts. The Flyers chased him with three goals in the first period of Game 2, but blew the lead as the Islanders roared back.

Philadelphia evened the series when Philippe Myers scored in overtime for the 4-3 victory.

The break gave Varlamov, along with Flyers goalie Carter Hart, plenty of time to rest before Game 3.