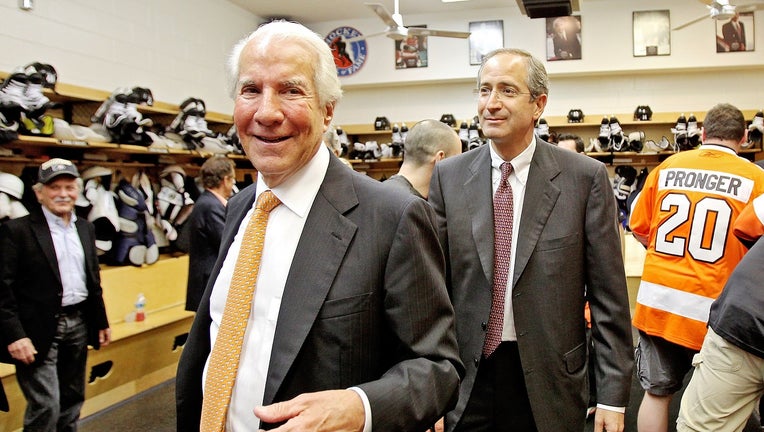 Philadelphia Flyers Chairman Ed Snider and Comcast CEO Brian Roberts walk through the Flyers locker room after the Flyers defeated the Chicago Blackhawks 4-3 in Game Three of the 2010 NHL Stanley Cup Final at the Wachovia Center on June 2, 2010 in Ph

PHILADELPHIA - Philadelphia Flyers founder Ed Snider will be honored with a mural in South Philadelphia.

The Ed Snider Youth Hockey Foundation and Mural Arts Philadelphia will dedicate "Snider Hockey: Inspiring Our Youth" on Saturday at 10th and Snyder Avenue. Snider, who died in 2016 , had long said he wanted his youth hockey foundation to become his legacy. The Flyers won Stanley Cups in 1974 and 1975 under Snider. He was arguably the most influential executive in Philadelphia sports history.

Snider Hockey was founded in 2005 and about 3,000 students are involved with the program. Snider Hockey targets inner-city boys and girls who otherwise would not have the opportunity to learn to skate or to play ice hockey.

The design was created by artist Jared Bader and highlights how Snider Hockey builds lives and unites communities through its on-ice and off-ice initiatives.