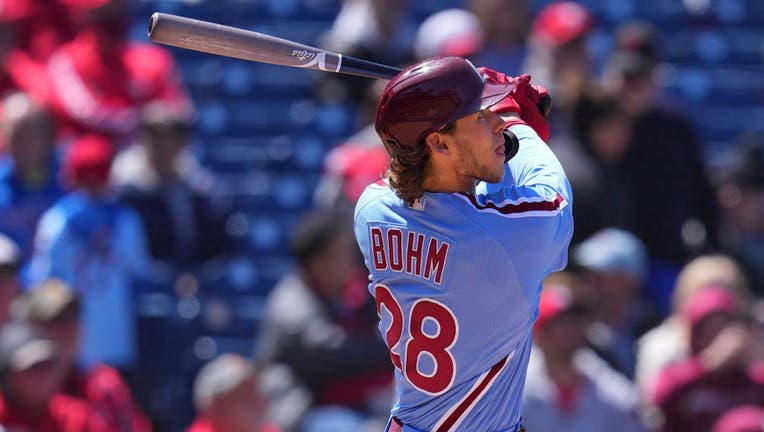 Alec Bohm hits a solo home run in the bottom of the fourth inning against the Colorado Rockies at Citizens Bank Park. (Photo by Mitchell Leff/Getty Images)

PHILADELPHIA - Zack Wheeler tossed one-hit ball over six shutout innings and Alec Bohm homered to help the Philadelphia Phillies complete a four-game sweep of the Colorado Rockies with a 7-1 victory on Thursday.

Wheeler, who lost his first three starts of the season, had an outing more in line with the ones that helped him finish second in NL Cy Young Award voting last season. Wheeler (1-3) struck out seven and walked four. He threw nine strikes on nine pitches without a strikeout in a 1-2-3 first inning and left Sam Hilliard stranded on third after a leadoff triple in the third inning.

The Rockies were swept in a four-game series in Philadelphia for the first time since July 2010.

They scored an unearned run in the second inning off Austin Gomber (1-2) off a throwing error by third baseman Ryan McMahon. McMahon made a whopping four errors in the series — a mark more stunning considering he made only seven last season. With a runner on first, J.T. Realmuto hit a hard grounder to McMahon, whose throw to second sailed into the outfield. Bohm made it 1-0 on an RBI groundout.

Roman Quinn bunted for a hit in the third, stole second base, stole third and scored on Rhys Hoskins’ sacrifice fly to left. Bohm added a solo shot to left in the fourth for his team-high 14th RBI.

Wheeler, who gave up seven runs to the Marlins two starts ago, has seemingly started to recover from right shoulder soreness that plagued him in spring training. He allowed Hilliard’s leadoff triple in the third, issued a one-out walk, then got Connor Joe to hit into a double play.

Hilliard grounded into a force-out off Brand Hand in the seventh to make it 3-1.

Bryce Harper forced in a run as part of a four-run seventh when he was hit in the leg with a pitch and the bases were loaded.

Rockies: OF Kris Bryant (back soreness) was sidelined for the third straight game. INF Brendan Rodgers (back) also sat out.

Harper went 1 for 3 on the 10-year anniversary of his first big-league game. Harper was 19 years old when he played for the Washington Nationals against the Los Angeles Dodgers. He won the Rookie of the Year Award that season and has twice won NL MVP, with Washington in 2015 and last season with the Phillies. He was back at designated hitter against the Rockies. Harper hasn’t played right field since April 16 due to a strained right elbow and won’t be back in the outfield anytime soon.

His wife, Kayla, posted on Instagram she was "in awe" of Harper and wrote of " 16+ apartments/houses to call home, 30 moves and too many flights to count."