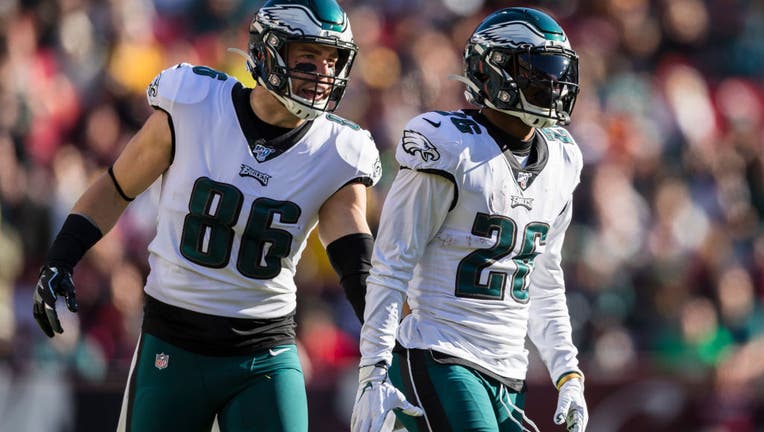 Zach Ertz #86 of the Philadelphia Eagles celebrates with Miles Sanders #26 after a play against the Washington Redskins during the first half at FedExField on December 15, 2019 in Landover, Maryland. (Photo by Scott Taetsch/Getty Images)

PHILADELPHIA - Stop us if you've heard this before - The Philadelphia Eagles will be without two of their top playmakers for their next game.

According to reports, tight end Zach Ertz could miss up to a month with a high ankle sprain while running back Miles Sanders could miss 1-2 weeks with a knee injury.

The news is the latest blow to an already depleted Eagles offense.

At the end of Sunday's game, Carson Wentz and Jason Kelce were the only Eagles first-teamers remaining in the game. Left guard Nate Herbig was a starter at right guard in week one, but was only called into action after the offseason injuries to Brandon Brooks, and Andre Dillard.

The offensive line's injuries have been well documented as they finished Sunday's game with third-stringers at both tackle positions.

In other news, the Eagles could get some relief in their receiving corps Thursday with DeSean Jackson possibly returning to the lineup.

Advertising: Enter the NFL Challenge contest on the FOX Super 6 app for free and you can win the $1M jackpot! Download now!