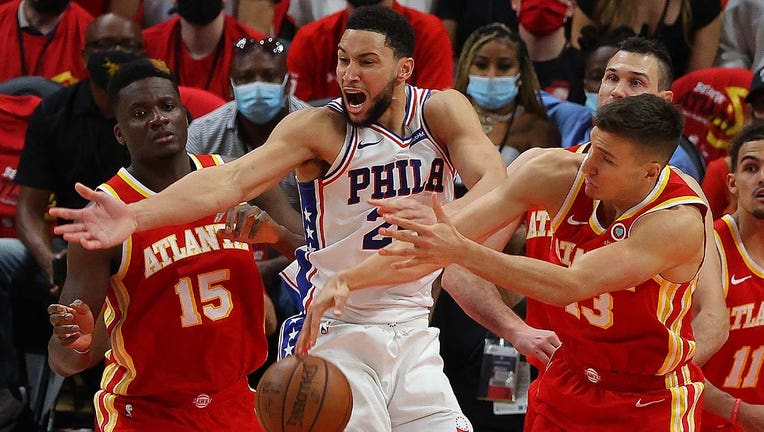 Ben Simmons #25 of the Philadelphia 76ers battles for a rebound against Bogdan Bogdanovic #13 of the Atlanta Hawks during the second half of game 3 of the Eastern Conference Semifinals at State Farm Arena on June 11, 2021 in Atlanta, Georgia. (Photo

PHILADELPHIA - The 76ers offseason drama surrounding Ben Simmons is coming to a head as the start of training camp draws near.

ESPN’s Adrian Wojnarowski reported Tuesday that the 25-year-old former number one overall pick will not report to training camp next week. He cited sources in adding that Simmons "intends to never play another game’ for the Sixers.

According to Wojnarowski, Simmons has not spoken to the team since late August, when he had a meeting with team officials and reportedly informed them he would not be showing up to camp.

Simmons took the brunt of the blame for the top-seeded Sixers' second-round exit in last season's playoffs. Simmons shot 34% from the free-throw line in the playoffs and was reluctant to attempt a shot from anywhere on the floor late in games. That led to him spending critical minutes on the bench.

Simmons shot 25 for 73 (34%) from the line in the playoffs and missed 27 alone in the second round against the Atlanta Hawks. He is a 5-for-34 career 3-point shooter over four NBA seasons.

Asked after the Game 7 loss if Simmons could still be a point guard for a championship contender, coach Doc Rivers said he didn’t have an answer.

Embiid also pointed a finger at Simmons for the loss, the comments seemingly creating a rift that will see the 25-year-old guard from Australia likely never play a game again for the Sixers.

The 76ers are scheduled to have media day on Monday, with training camp opening the next day at their complex in Camden, New Jersey.