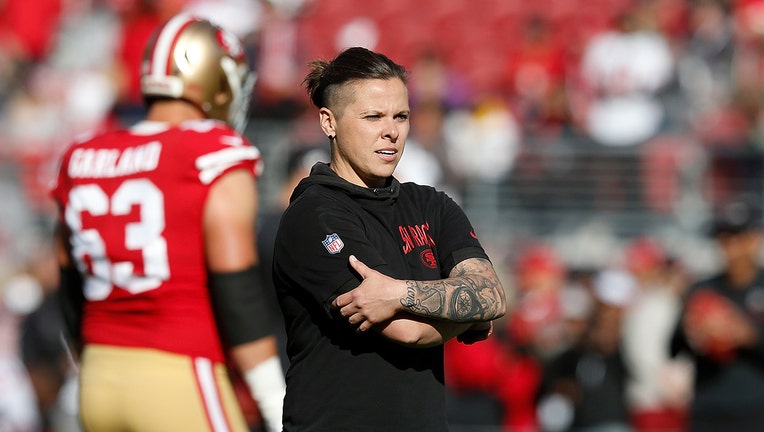 SANTA CLARA, CALIFORNIA - DECEMBER 15: San Francisco 49ers offensive assistant coach Katie Sowers looks on during the warm up before the game against the Atlanta Falcons at Levi's Stadium on December 15, 2019 in Santa Clara, California. ( Photo by Lachlan Cunningham/Getty Images )

Sowers, an offensive assistant with the team, will be the first female and first openly gay coach to appear at the Super Bowl in the NFL’s history. The 49ers defeated the Green Bay Packers on Sunday for the NFC Championship, and Sowers shared her excitement on social media about winning the title.

“Takin our talents to south beach,” Sowers said in a video channeling her inner LeBron James. “49ers vs. Chiefs …I couldn’t ask for a better game.”

Her video showed confetti flying across Levi’s Stadium as San Francisco celebrated their conference title and making the Super Bowl for the first time since the 2012 season.

Sowers, 33, became the second female NFL coach when she joined the team in 2017 as a seasonal offensive assistant. She told PEOPLE magazine in November that her historic standing in the league won’t define her career.

“When you ask any of the coaches who work with me, often they’ll get asked about working with a female,” she told People magazine. “To them, it’s not even something that they think about — and it’s not something that I truly think about. They see me for who I am as a coach, and not a female coach.”

Sowers played professional football in the Women’s Football Alliance and was a member of the U.S. women’s national football team. The national team won the IFAF Women’s World Championship in 2013. She started her career as a wide receivers intern with the Atlanta Falcons in 2016 and was an intern scout until 2017, when she joined the 49ers.

Get updates on this story from FOX News.com