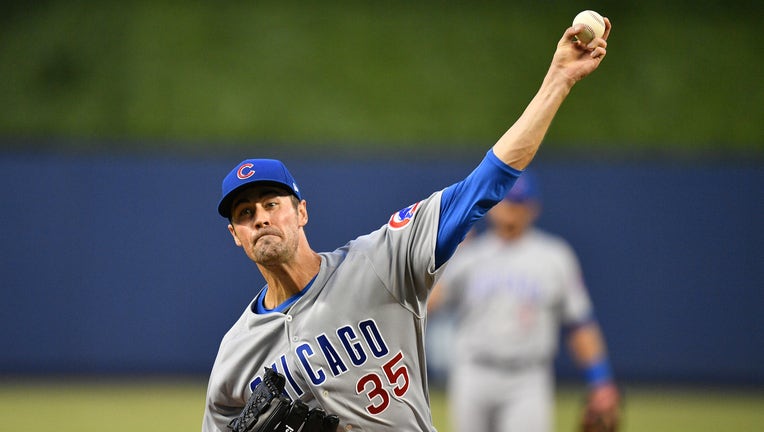 Cole Hamels #35 of the Chicago Cubs throws a pitch in the first inning against the Miami Marlins at Marlins Park on April 17, 2019 in Miami, Florida. (Photo by Mark Brown/Getty Images)

CHICAGO - Former Phillies pitcher Cole Hamels will make his first career start against his old team Wednesday night as a member of the Chicago Cubs.

Hamels, who went 114-90 in his 10 seasons in Philadelphia, is currently 4-0 on the season. He will face the new Cole in Philadelphia in rookie left-hander Cole Irvin, who is 2-0 so far this season.

Hamels remains beloved in Philadelphia after helping lead the Phillies to win the 2008 World Series and 2009 NL pennant.

During the 2015 season, Hamels was traded to the Texas Rangers, who sent him to the Cubs last summer.

Monday night, Phillies pitcher Jake Arrieta got a warm welcome from Chicago Cubs fans during the pregame introductions and was greeted with a standing ovation when he stepped to the plate in the third inning. He responded by tipping his helmet toward the crowd.

It was a fitting reception for a pitcher whose 4½ seasons in Chicago included an NL Cy Young Award in 2015, a drought-busting World Series championship in 2016, two no-hitters and an All-Star selection. He left to sign with Philadelphia before the 2018 season.

Wednesday’s game is slated to start at 8 p.m.