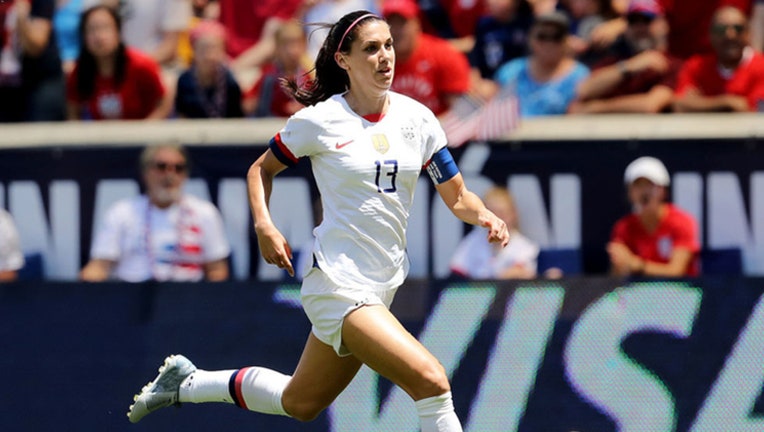 Alex Morgan of the United States (Photo by Elsa/Getty Images)

REIMS, France - Thailand can dream. It just might not do any good against the U.S. national team.

Thailand kicks off the Women's World Cup on Tuesday with a daunting challenge against the defending champion United States. The top-ranked Americans are seeking their fourth overall World Cup title, and Thailand coach Nuengruethai Sathongwien said the team is not backing down.

The Thais are ranked No. 34 in the world but in its 2015 World Cup debut the team finished third in its group with a first win on the sport's biggest stage, a 3-2 victory over Ivory Coast.

Games against top opponents give Thailand an opportunity to see how the team is progressing, with a goal of growing the game back home.

"We are here in the 24-team final, that is our success, and to play one of the best teams in the world, that is also a success," Sathongwien said.

For the United States, success will be another star above its crest.

The Americans charged through Canada four years ago to the final, beating Japan 5-2 to raise the trophy. Carli Lloyd scored three goals in the title game's first 16 minutes.

The United States is also celebrating the 20-year anniversary of the 1999 team that memorably won the title on home soil, downing China on penalties after a scoreless draw at the Rose Bowl. The '99ers, as they are known, were credited with raising the women's game in the United States.

The United States is not getting ahead of itself at the World Cup, although it's generally understood that the team's first two group games - against Thailand and Chile - should not be all that demanding. But in the final group match before the knockout round, the Americans will face nemesis Sweden, who they've been grouped with six times in World Cup play.

"I respect every team over here because I think sometimes it's incredibly hard to get here. So the fact that they're here, they're competing, and they're ready, we know we have to be at our very best," U.S. coach Jill Ellis said. "That's the challenge for us, making sure we identify our opponent, but also make sure we focus on ourselves and make sure all our tools are sharpened and ready to go."

Thailand and the United States are the final two teams in the field to kick off in the group stage. Earlier in the evening, Sweden plays Chile in Rennes.

The team is focused on winning again in France even while at home the players are looking for a different victory. Known for championing women's rights and equality, the players collectively filed a lawsuit earlier this year that alleges discrimination by the U.S. Soccer Federation and are seeking pay equitable with that of the men's national team.

That's on the backburner for now.

"Of course we have additional things outside of this team that people are going to try to distract us with, or things before that we have put on hold, that we will remain doing after the World Cup," forward Alex Morgan said. "But right now this is our focus, this is our sole focus."

LATE OPENERS: In addition to the matches between the U.S. and Thailand in Reims, and Sweden and Chile in Rennes, New Zealand opens with the Netherlands in Le Havre.

RECAPPING MONDAY: Canada held off Cameroon 1-0 in Montpellier on Kadeisha Buchanan's header off a corner. .... Argentina made its World Cup debut and played to a 0-0 draw in Paris with 2011 champion Japan, snapping a six-game losing streak. For the Argentinians, the tournament is not necessarily about wins, but respect.

GOLDEN BEAR PRIDE: Morgan played at California, leading the Golden Bears to the NCAA Tournament in each of her four seasons from 2007-10. Forward Miranda Nild, who went to Cal from 2015-18, has 12 goals in 17 appearances with Thailand.

Morgan said she introduced herself on Monday, joking that it was important to make the first overture. "I'm glad to have the edge on that," she joked.

Cal is also represented on New Zealand's team. Betsy Hassett (2009-12) played with Morgan for two of her seasons. Daisy Cleverley, a junior midfielder for the Golden Bears, also is making her second World Cup appearance for the Ferns.