A total of 24 teams qualified for the final tournament by competing in qualifying matches, and the host country automatically qualifies.

LOS ANGELES - The U.S. Women's National Team, ranked No. 1 globally, will try to defend its title in soccer's premier tournament, which begins Friday in Paris.

If you don't watch soccer but want to get in the spirit, here are some basics to know before you cheer on the Americans:

What is the World Cup?

The World Cup is organized by the Fédération Internationale de Football Association, or FIFA, and the men's and women's international tournaments are held every four years. The men's World Cup began in 1930, while the women's didn't start until 1991.

The 2019 FIFA Women's World Cup consists of 52 matches held in nine cities across France between June 7 and July 7.

Who qualified for the Women's World Cup?

A total of 24 teams qualified for the final tournament by competing in qualifying matches, and the host country automatically qualifies. 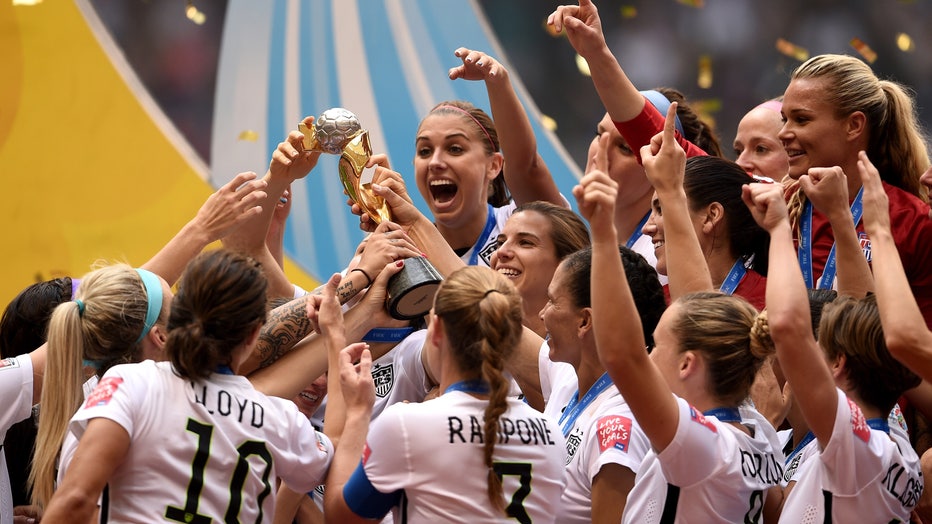 The United States celebrates after winning the FIFA Women's World Cup Canada 2015 5-2 against Japan at BC Place Stadium on July 5, 2015 in Vancouver, Canada. (Photo by Dennis Grombkowski/Getty Images)

How does the Women's World Cup draw work?

Before the draw, each of the qualifying teams were put into one of four pots based on their FIFA rankings. The highest ranked teams are in Pot 1, the next six teams are in Pot 2, and so on.

The United States will play Sweden, Thailand and Chile in Group F.

How does the actual tournament work?

With the 24 teams divided into six groups, A through F, each group plays a round-robin stage — meaning each team plays against the other three teams in their group.

Three points are given for a win, while teams are awarded one point for a draw. The two top teams in each A through F group advance to the 16-team knockout stage.

Additionally, the top four third-place teams advance based on total points. After points, various tiebreakers are decided for ties within groups, including goal difference and goals scored.

The remaining 16 teams play in the knockout stage. If a match is tied at the end of 90 minutes at this round of the tournament, the teams play two extra 15-minute periods. If it's still tied, the match is decided by a penalty shootout.

The quarter-finals are scheduled to begin June 27, followed by semi-finals, a third place playoff and the final scheduled for July 7.

Where can I find the 2019 Women's World Cup schedule?

How can I watch?

All 52 matches for the 2019 FIFA Women’s World Cup will air live on FOX Sports and the FOX Sports App.

Every World Cup has a mascot, and France 2019 is Ettie the young chicken. She has "a passion for life and football," according to FIFA's website.

Here are just a few highlights of players to keep an eye on in one of the most highly-anticipated World Cup tournaments to date.

Oh, and while the Americans make their way around France for the month-long event, back at home they're all part of a lawsuit that accuses U.S. Soccer of gender discrimination.