US in World Cup final after win over England

The United States will face either Sweden or the Netherlands in the July 7 final.

LYON, France - The United States is now one win away from earning its fourth FIFA Women's World Cup title after defeating England 2-1 Tuesday in a hard-fought semifinal match.

Christen Press, who started in lieu of Megan Rapinoe out with a hamstring injury, scored her first goal of the tournament in the 10th minute — heading it into the net after a cross from Kelley O'Hara for an early 1-0 lead.

England’s Ellen White answered back in the 18th minute of the semifinal, tying the match at 1 and getting her sixth goal of the World Cup.

Alex Morgan, celebrating her 30th birthday, gave the USA the lead again with a goal in the 31st minute. 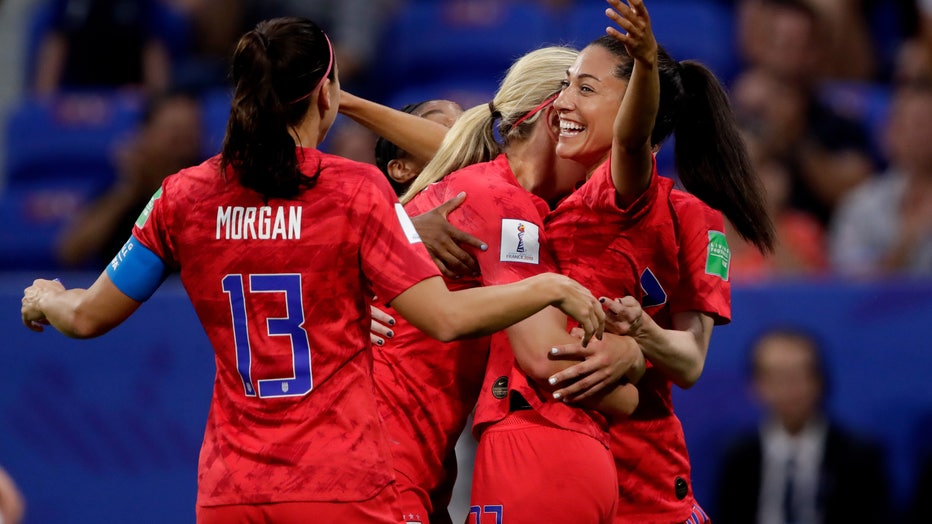 Morgan now leads for the Golden Boot, an award given to the top goalscorer of the FIFA World Cup, with six goals and three assists.

In the second half, USA’s Rose Lavelle injured her hamstring and was replaced by Sam Mewis. In the 67th minute, White sent a shot past U.S. goalkeeper Alyssa Naeher — but the potential tying goal was called back after determining she was offside.

Carli Lloyd came in for the United States, replacing forward Tobin Heath in the 80th minute.

White just missed a tying goal. After a video review in the 84th minute, England was granted a penalty kick and Becky Sauerbrunn received a yellow card. Naeher saved the penalty kick, keeping the United States lead at 2-1 and securing the team’s place in the final.

The U.S. will face either Sweden or the Netherlands, who play Wednesday, in the July 7 championship. The third place match will take place on July 6.

Rapinoe, the U.S. team co-captain, scored twice in a 2-1 victory over Spain in the round of 16 before another two goals in the 2-1 quarterfinal victory over France — one of the most highly-anticipated matches of the tournament. The team won in their group over Sweden, Chile and a 13-0 victory over Thailand.

The top-ranked Americans have been to the semifinals of all eight World Cups, and they've won the trophy three times, more than any country. The U.S. team's lone loss in a World Cup title match came to Japan in 2011.

England reached the semifinal by defeating Cameroon and Norway in the knockout stage. In their group, they defeated Japan, Argentina and Scotland.

England has never made it to the World Cup final. The Lionesses fell to Japan in the 2015 semifinals in Canada before going on to defeat Germany in the third-place match for the team's best tournament finish.

"America has got that ruthless streak of wanting to win," Neville said. "You saw the last five minutes of the (quarterfinal) game against France. The game management was fantastic. They took the ball into the corner, they knew what it took to win, and they celebrated like winners. That's what I admire, and that's what my team has now. It's about winning."

During the 2019 World Cup, the women have broken records.

The U.S. Women’s National Team jersey became the most-sold soccer jersey – men’s or women’s – in a single season on Nike.com. The team’s match against France was the most-watched FIFA Women’s World Cup quarterfinal in the U.S. – drawing 6.3 million viewers on FOX and FOX streaming services as well as 8.2 million viewers on television alone, according to Nielsen ratings.

FIFA estimates at least 1 billion viewers around the world will have watched the Women’s World Cup when it ends on July 7.