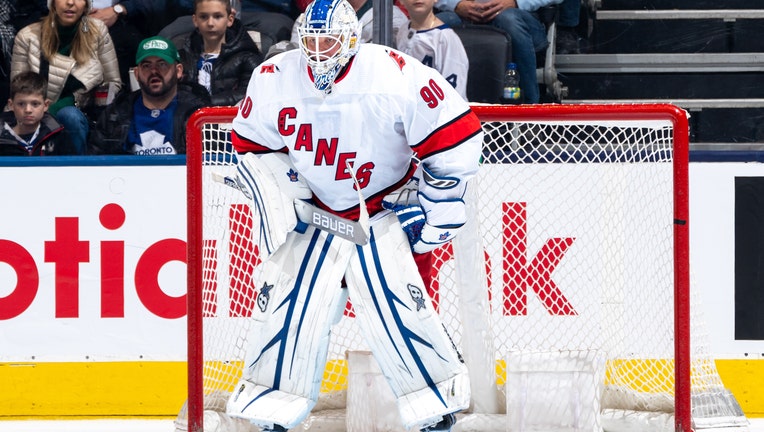 TORONTO, ON - FEBRUARY 22: Emergency backup goaltender Dave Ayres #90 of the Carolina Hurricanes looks on against the -Toronto Maple Leafs during the third period at the Scotiabank Arena on February 22, 2020 in Toronto, Ontario, Canada. (Photo by Kev

Ontario, Canada - David Ayres will get another turn in the spotlight — this time in Carolina

A night after Ayres stepped in as an emergency goalie in Carolina's 6-3 victory at Toronto, the Hurricanes said they are bringing the Zamboni driver to Raleigh for their game Tuesday night against the Dallas Stars.

"See you Tuesday, Davey!" the club said on its Twitter account. “Ayres will be in the building on Tuesday and will be our @VectorSecurity Siren Sounder!"

"They're flying me down to Carolina for their game on Tuesday so I'll get to spend more time with the guys, which is good," Ayres said Toronto on Sunday at the Maple Leafs' practice facility. "They're a great team, great organization."

The Hurricanes started selling shirts with Ayres' name and No. 90 after the game. The team says Ayres will get royalties and a portion of the proceeds will go to a kidney foundation in honor of the goaltender, who underwent a kidney transplant in 2004.

Also, the Hurricanes recalled goaltenders Anton Forsberg and Alex Nedeljkovic from Charlotte of the American Hockey League after losing James Reimer and Petr Mrazek to injuries in Toronto.

The 27-year-old Forsberg has posted a 15-9-2 record with a 2.95 goals-against average and a .905 save percentage in 27 appearances with the Charlotte Checkers. The Hurricanes acquired Forsberg in a trade last June.

The 24-year-old Nedeljkovic has posted a 15-10-2 record, 2.51 goals-against average and a .905 save percentage with four shutouts in 28 appearances with the Checkers. The Hurricanes selected him in the second round of the 2014 draft.