MOUNT HOLLY, N.J. - Tornadoes tracked across parts of the Delaware Valley Thursday evening, leaving a path of destruction that spanned 100 miles from Lehigh and Bucks counties in Pennsylvania to Monmouth and Ocean counties in New Jersey.

One of those warnings – issued at 5:51 p.m. and updated at 6:02 p.m. for south-central Hunterdon County in northwestern New Jersey, northwestern Mercer County in central New Jersey and east-central Bucks County in southeastern Pennsylvania – was a rare "particularly dangerous situation," or PDS, tornado warning.

The PDS tag in a tornado warning is only used when there is credible evidence of a damaging tornado on the ground, either from lofted debris appearing on Doppler radar or from storm spotters getting an actual visual of the twister.

"At 601 PM EDT, a confirmed large and dangerous tornado was located over New Hope, or 11 miles northwest of Trenton, moving southeast at 25 mph," the NWS wrote in the warning. "This is a PARTICULARLY DANGEROUS SITUATION. TAKE COVER NOW!"

"At 606 PM EDT, a large and extremely dangerous tornado was located over Washington Crossing, or 9 miles northwest of Trenton, moving southeast at 25 mph," the NWS wrote in the warning. "This is a PARTICULARLY DANGEROUS SITUATION. TAKE COVER NOW!"

This was the first time the NWS office in Mount Holly had ever issued PDS tornado warnings. However, it did issue three PDS flash flood warnings in the past, including one for Bensalem, Pennsylvania, earlier in July (not far from where Thursday's tornado struck).

Including the 14 on Thursday, the NWS office in Mount Holly has now issued 29 tornado warnings so far this year – all in July.

That's more than the 22 tornado warnings issued by the Norman, Oklahoma, weather service office, located in the heart of Tornado Alley. And those 22 warnings were spread out over 2.5 months from mid-March through the end of May. 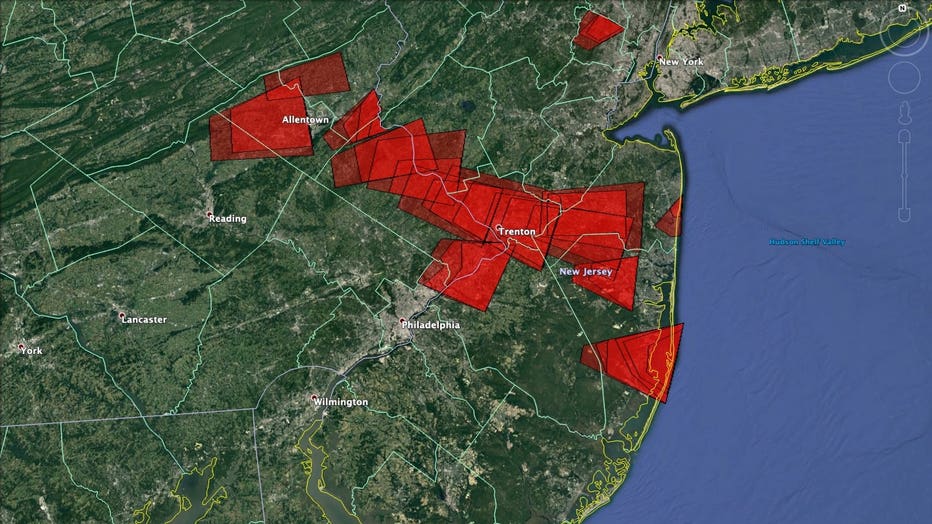 Each red polygon is a tornado warning that was issued by the NWS on Thursday, July 29, 2021. The path of the warnings spanned 100 miles from Lehigh and Bucks counties in Pennsylvania to Monmouth and Ocean counties in New Jersey. (Map: Google Earth; Data: NWS)

The NWS planned to begin surveying the widespread storm damage in Pennsylvania, New Jersey and Delaware on Friday. However, with about 100 miles of ground to cover from the Lehigh Valley to the Jersey Shore, it's likely the storm surveys will take a few days. An NWS survey team also has to travel down to the Bethany Beach, Delaware, area.

Therefore, we might not know how strong the tornadoes were or exactly how many twisters touched down in our region until sometime over the weekend after all storm surveys are completed.

While we won't know for sure until the NWS has finished surveying all the damage in New Jersey, it's possible that Thursday might have tied or broken the Garden State's record number of tornadoes in any outbreak.

According to Bob Henson, a meteorologist and science writer at Yale Climate Connections, the NWS and NOAA's Storm Prediction Center had catalogued seven tornadoes from Thursday's rotating supercell thunderstorms in New Jersey. If all of these tornadoes are confirmed by the NWS, he noted on Twitter, it will tie New Jersey's all-time record outbreak from Nov. 16, 1989, when seven twisters touched down in the state.

Prior to Thursday, five tornadoes had been confirmed in the Mount Holly weather service office's County Warning Area: three in New Jersey and two in Delaware, all of which occurred in July.

New Jersey averages two tornadoes per year, according to the NWS. The much larger state of Pennsylvania averages 16 twisters per year, while Delaware (the nation's second-smallest state by area) averages just one.