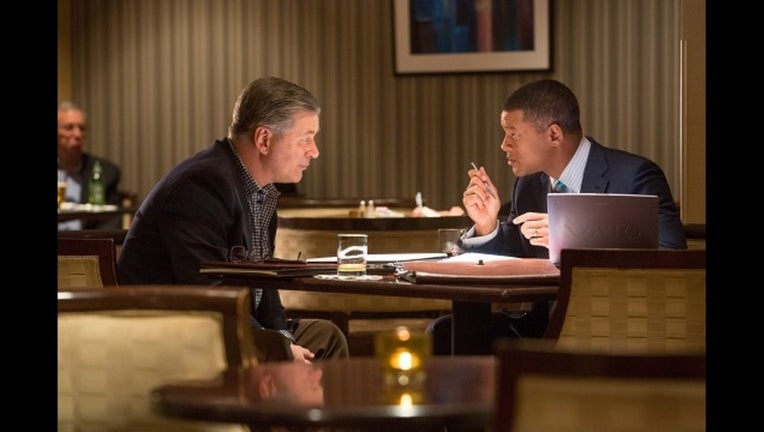 WTXF - Concussion wants desperately to be The Insider: A fact-based story about one man standing up against an evil corporate entity, produced only a short time after the real events took place, and having the effect of turning the world against said entity.

The film, which alleges that the NFL knew about its concussion problem and did little to address it, has its heart and sympathies in the right place. It's a story absolutely worth telling, boasted by a half-dozen strong performances. Its ultimate failure is in the filmmaking itself.

Directed by Peter Landesman, who with 2013's Parkland directed the most boring movie ever made about the JFK assassination, Concussion tells the story of Dr. Bennett Omalu (Will Smith), the researcher who played a major role in establishing that NFL players are in unusual danger of concussions, brain damage and early death. But in speaking out, Dr. Omalu faces significant pushback from the NFL, which seeks to undermine his work at every turn.

In an introductory flourish that I bet Aaron Sorkin is kicking himself for never having tried, Omalu is introduced on a witness stand, taking several minutes to rattle off every one of his academic degrees. I have no doubt that Dr. Omalu is a wonderful doctor and researcher who has done important work. But he's ill-served by a film that both exaggerates his work and frames it in sort of ridiculous terms.

The film has one intriguing idea- that Dr. Omalu is a highly talented immigrant who always wanted to come to America, arrived with great success, yet had his introduction to his adopted homeland lead to a direct confrontation with that nation's most popular game. But even then, it overplays its hand, by stating that premise out loud four or five times.

The central dichotomy here is that football fans -and players, for that matter- know all about the concussions and dangers and that a lot of the men who play the game are going to end up either crippled or dead at a young age. They just don't care enough to stop watching. The film touches on this, but only barely.

This is nowhere close to the best possible version of this story. For one thing, it gives credit to Omalu for things he didn't actually do (he did not, in fact, name the brain disease "chronic traumatic encephalopathy.") it completely omits any non-Omalu researchers, such as the Boston University team that's been at the forefront of actually testing athletes' brains. That one of those researchers, Chris Nowinski, was once a WWE wrestler indicates that I might rather see a movie about him.

Some of the filmmaking choices are truly odd. As if to demonstrate the omnipresence of the NFL, the camera keeps zooming abruptly from wherever the characters are talking to a shot of Pittsburgh's Heinz Field. By the fifth or sixth time, you'd get the impression that the entire greater Pittsburgh metro area is across the street from the Steelers' stadium.

There are times when it just gets goofy. I supposed it's possible that Omalu's wife was once followed in her car by agents of the NFL and they caused her to have a miscarriage- but I've got a feeling it didn't really happen that way. The film also implies, laughably, that the NFL had some hand in the government bringing charges against Dr. Omalu's mentor, Dr. Cyril Wecht. And one female character, ridiculously, states out loud that the NFL's pushback against Omalu is comparable to a sexual assault in her past.

It's a shame that the film wastes such a first-rate cast. Smith gives a strong, commanding performance, and his Nigerian accent is actually convincing. Albert Brooks is fantastic as Dr. Wecht, the onetime Fox News fixture who was Omalu's mentor, even if Wecht has little to do with the plot.

Alec Baldwin has the other meaty supporting role, as the former Pittsburgh Steelers team doctor who turns on the system, although the film doesn't do nearly enough with this character. Gugu Mbatha-Raw is appealing as always as Smith's wife, and David Morse does heartbreaking work as Mike Webster, the Steelers Hall of Famer who died homeless and penniless at age 50.

On the other hand? Mike O'Malley has a ludicrous part as a morgue doctor who puts his meathead football fandom ahead of his work. And Luke Wilson plays NFL commissioner Roger Goodell despite looking nothing like him- would putting him in a red wig have been that difficult?

If you want to know about the NFL's concussion epidemic, there are much better places- multiple documentaries, magazine articles, HBO Real Sports segments- to get the story.

Michael Lewis writes bestselling books mainly about two topics- sports and business. Even though his sports books- like Moneyball and The Blind Side- have been adapted into movies, I always thought his business books were even more cinematic. His first-person '80s Wall Street chronicle Liar's Poker, in the right hands, could have been the best film of 1991.

Of course, there's a good reason why Hollywood has ignored Lewis' business books- they're damn complicated. So now, we have an adaptation of his 2010 book The Big Short, which dealt with a topic- the 2008 financial crisis- that's practically legendary in how it's so complex that almost no one can explain it in plain English. And it's directed by… Adam McKay, the director of Anchorman, who has spent most of his career working with Will Ferrell.

The Big Short movie, despite those odds, is a nearly complete triumph. It uses an outstanding cast, a touch of humor and a series of cheeky devices to avoid falling too far into the weeds to deliver a hugely entertaining film.

To explain briefly: The Big Short (the book) focused on the small handful of people who saw the 2008 financial collapse coming and bet in favor of the housing market collapsing- enriching themselves to the tune of billions, but at the same time profiting from untold suffering. And if you think the film soft-pedals this, you're wrong.

The cast is just fantastic- led by Steve Carell as a character based on Wall Street hotshot Steve Eisman. Nevermind whatever he was doing in Foxcatcher- this is Carell's best performance. Christian Bale knocks it out of the park once again as an eccentric doctor-turned-hedge funder, while Brad Pitt does his requisite small-part-in-a-film-he-coproduced. And it's kind of a shocker that Ryan Gosling has never played a slimy Wall Street guy before.

No, this isn't quite the triumph that Scorsese's The Wolf of Wall Street was- but its goals are very different. TWOWS was set in the mid-'90s and was only tangentially about the '08 collapse (or really, about Wall Street itself.) There's also the documentary Inside Job and fiction films like Margin Call, but The Big Short will almost certainly go down as the definitive movie about the '08 collapse.

Carol is quite simply what director Todd Haynes does best. It's a period piece set in the 1950s in which absolutely every detail is exactly right, whether with the art direction or the costumes or the look and feel.

Of course, there's also the matter of near-career best performances from both Cate Blanchett and Rooney Mara. The two play lesbian lovers in the film, based on a pseudonymously written novel by Patricia Highsmith.

This may sound like a political or identity-politics sort of movie, but it's really not that at all. It's a love story and a road movie and an exercise in style, though not necessarily in that order.

Carol is getting some of the year's best reviews, and they're deserved.