Breaking down the bust: 16.5 tons of coke seized at Philly port

Authorities seize more than 15,000 kilos of cocaine, worth $1 billion, in an historic bust right here in Philadelphia. What we're learning about how the drugs were loaded onto the ship, and the two men charged after the bust.

PHILADELPHIA - More than 33,000 pounds of cocaine was seized – a billion dollar drug bust –from a ship at Philadelphia's port – in one of the largest drug busts in American history.

Investigators say the massive container ship docked at Packer Marine Terminal early Monday morning. Federal agents say the ship just came in from the Bahamas and was headed to the Netherlands when several law enforcement agencies caught wind and executed a search.

They found 16.5 tons of cocaine hidden in seven separate containers.

An affidavit alleges that crew members helped load the cocaine onto the MSC Gayane while it was at sea off the west coast of South America. Citing an interview with one of the crew members, authorities said a total of 14 boats approached the vessel on two separate occasions during its voyage. Several crew members allegedly helped transfer bales of cocaine.

The ship's second mate, Ivan Durasevic, and another crew member, Fonofaavae Tiasage, were charged with conspiracy to possess cocaine aboard a ship. An online court docket did not list attorneys for the defendants. It wasn't clear whether other crew members would face charges. 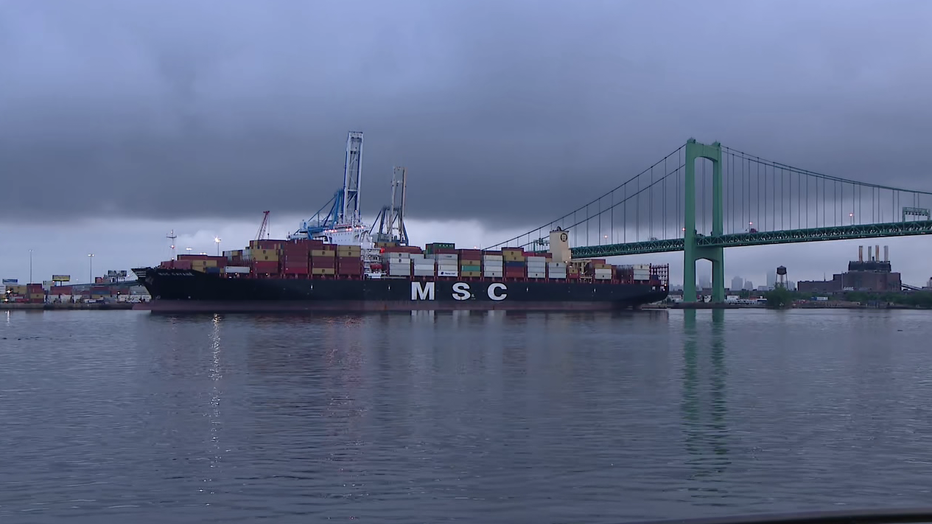 The drug seizure is the latest in a series of large cocaine busts along the East Coast. In a March bust in Philadelphia, drug dogs sniffed out 1,185 pounds (538 kilograms) of cocaine worth about $38 million -- at that time the city's largest seizure of the drug in more than two decades.

In February, customs agents seized 3,200 pounds (1,451 kilograms) at the Port of New York and New Jersey with a street value estimated at $77 million. That was the largest cocaine bust at the ports since 1994.

Online ship trackers said the vessel detained in Philadelphia sails under the flag of Liberia and arrived in Philadelphia after 5 a.m. Monday. The ship's previous ports of call were the Bahamas on June 13, Panama on June 9, Peru on May 24 and Colombia on May 19, records show.

Federal authorities say Colombia is the primary supplier of cocaine to the U.S.

Mediterranean Shipping Company released a statement after the bust that reads in part: “MSC … is aware of reports of an incident at the Port of Philadelphia in which U.S. authorities made a seizure of illicit cargo. ... MSC takes this matter very seriously and is grateful to the authorities for identifying any suspected abuse of its services."

Former federal attorney Fred Tecce joined “Good Day Philadelphia” Wednesday morning to help break down the bust. You can hear his remarks in the videoplayer above.