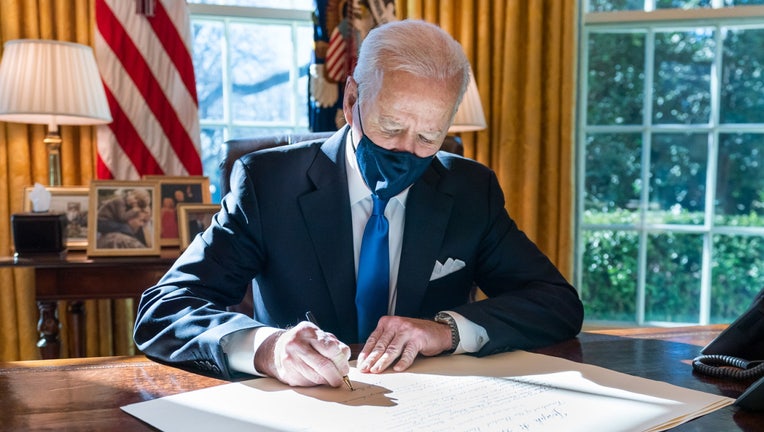 President Biden will have "more to say" in April about his coronavirus recovery plan focused on issues like health care and women leaving the workforce after pushing a $1.9 trillion coronavirus relief package earlier this month, White House press secretary Jen Psaki said on Sunday.

"When the president advocated for the American Rescue Plan, he talked about this being two stages: rescue then recovery. What the American people will hear from him this week, is part of his plan, the first step of his plan toward recovery which will include an investment in infrastructure," Psaki told "Fox News Sunday."

"He's going to have more to say later in April about the second part of his recovery plan, which will include a number of the pieces you talked about -- health care, child care, addressing that. It's a crisis right now, the number of women who have left the workplace," she continued. "The total package, we're still working out."

President Joe Biden delivered remarks Saturday, March 6, 2021 after the Senate worked overnight to pass the $1.9T COVID-19 relief bill with a vote of 50-49.

That package and the Democrats' expected infrastructure bill will be "two separate proposals," Psaki said.

"We'll work with the Senate and the House to see how it should move forward," she said.

Biden is expected to detail an infrastructure package on Wednesday during a speech in Pittsburgh.

Senior Democratic officials are proposing as much as $3 trillion in new spending on a jobs and infrastructure bill that would become the foundation of Biden's "Build Back Better" program. Politico reported that Democrats are eager to fit what they can in the package, including new measures on drug pricing and climate policy.

Meanwhile, the federal debt is poised to double to 202% of gross domestic product over the next 30 years, according to the Congressional Budget Office. The national debt stands at more than $28 trillion.