Two police officers were shot in Louisville as protests erupted in the Kentucky city.

LOUISVILLE, Ky. - Two police officers were shot in Louisville as protests erupted in the Kentucky city and other demonstrations were planned in cities across the country in response to a Kentucky grand jury’s decision to not indict police officers on criminal charges directly related to Breonna Taylor’s death.

At a press conference, police officials said the two officers sustained “non life-threatening” injuries. One officer was alert and stable, and the second officer was undergoing surgery, and was also in stable condition, according to interim Louisville Metro Police Chief Robert Schroeder. Police said one suspect was in custody.

Schroeder said the officers were shot after investigating reports of gunfire at an intersection where there was a large crowd.

Several shots rang out as protesters in downtown Louisville tried to avoid police blockades, moving down an alleyway as officers lobbed pepper balls, according to an Associated Press journalist. People covered their ears, ran away and frantically looked for places to hide. Police with long guns swarmed the area, then officers in riot gear and military-style vehicles blocked off roadways.

In response to the shootings, President Donald Trump tweeted, “Praying for the two police officers that were shot tonight in Louisville, Kentucky.”

Trump said he spoke with Kentucky Gov. Andy Beshear, writing, “we are prepared to work together, immediately upon request!”

Beshear released a video on Twitter addressing the shootings, saying, “I know that with the events of today, many people are feeling powerful emotions, whether that’s frustration, anger, concern. And many people have been out on the streets, especially in Louisville tonight, giving voice to those emotions. But sadly we have seen at least one individual turn what were non-violent ways of expressing ourselves into the shooting of at least two law enforcement officers. We know that the answer to violence is never violence, and we are thinking about those two officers and their families tonight.”

Video captures moment police officer down in Louisville during protest

Two police officers were shot in Louisville as protests erupted in the Kentucky city.

“Let’s make sure we don’t see any more violence tonight, and let’s make sure that we find ways of expressing ourselves moving forward where your point and other people’s points are made, and hopefully we can not just listen, but we can hear,” Beshear said.

The crowd in downtown Louisville began marching through the streets and chanting, “No justice, no peace!” hours after a grand jury announced that it had indicted only one former Louisville officer, Brett Hankison, on three counts of wanton endangerment.

The charges stem from Hankison’s firing shots into Taylor’s neighbors’ homes. Each count carries a sentence of up to five years.

Police in Louisville set off flash bang devices to clear a square where several hundred people gathered to protest the grand jury’s decision. The protesters had rallied Wednesday evening in Jefferson Square, where a fire was set near the courthouse and then quickly extinguished.

Police lined up with shields outside of the courthouse, and demonstrators threw plastic water bottles at the officers. Demonstrators began chanting “Breonna Taylor" before officers fired the flash bang devices to disperse the crowd.

Beshear said he had authorized a “limited” deployment of the National Guard as hundreds of demonstrators gathered.

The Democratic governor said Wednesday at a news conference that the deployment is “based on very specific operations,” and is under the sole command of the National Guard.

Protests erupted in Louisville following the Kentucky grand jury's decision not to indict police officers in the case of Breonna Taylor.

Protests quickly erupted elsewhere as well: Demonstrators marched through the streets of New York, Chicago, Washington, D.C., Atlanta, and Philadelphia. Packed into a New York City Plaza, protesters chanted, “Say her name, Breonna Taylor,” before marching in the street in downtown Brooklyn, past onlookers and honking cars. They were accompanied by musicians setting a steady drum beat. 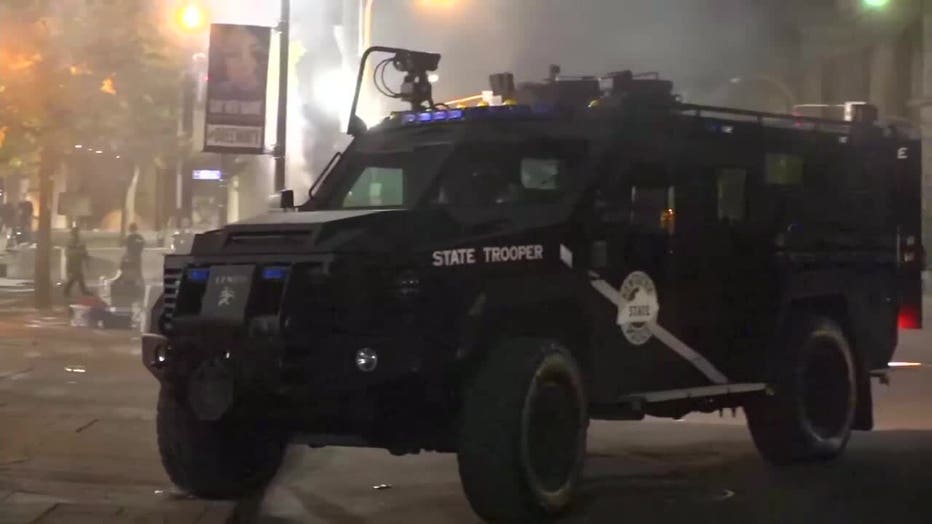 In Atlanta, protests were planned at two different locations for demonstrators to voice their outrage over the lack of charges in the case. Hundreds of people took to the streets in Downtown Atlanta on Wednesday evening to protest.

At the Minnesota State Capitol in St. Paul, a "Breonna Taylor emergency response rally" was planned. In nearby Minneapolis, George Floyd died after being arrested by police on May 25.

Kentucky Gov. Andy Beshear says he has authorized a “limited” deployment of the National Guard.

The Minnesota protest started at the State Capitol around 6 p.m. and moved west Wednesday night. The crowd later marched onto I-94, leading authorities to block off traffic in the area. The protesters stayed on the highway for about 30 minutes before getting off and moving onto the nearby streets.

JaNaé Bates of the interfaith group ISAIAH Minnesota said hearing that the shooting death of Taylor brought only charges of wanton endangerment against one former officer feels like more of the same.

“It’s upsetting. And it’s mostly upsetting because it’s expected,” Bates said. “I’ve been in this work for years now and I’ve seen way too many families who have been hurting about this. Too many people’s names have been hashtags and so little has been done.”

Bates said with the death of Taylor, and then the death of Floyd two months later, 2020 became the boiling point for years of frustrations. The latest charging decision only adds more.

The deaths of both Taylor and Floyd at the hands of police has fueled a national reckoning on race this year.

Taylor, a 26-year-old Black emergency medical worker, was shot multiple times in her home on March 13. Louisville Metro Police officers entered her home on a no-knock warrant during a narcotics investigation. The warrant used to search her home was connected to a suspect who did not live there, and no drugs were found inside.

The use of no-knock warrants has since been banned by Louisville’s Metro Council.

Before charges were brought, Hankison was fired from the city’s police department on June 23. Hankison had previously been placed on administrative reassignment, as were Mattingly, Officer Myles Cosgrove and the detective who sought the warrant, Joshua Jaynes.

Taylor’s case set off a national cry for “justice for Breonna Taylor,” and celebrities, athletes, activists and Taylor’s family for months have pushed Cameron to criminally charge the officers involved in the raid.

RELATED: Wanton endangerment: What do charges against officer in Breonna Taylor case mean?

This story was reported from Cincinnati. The Associated Press and Austin Williams contributed.