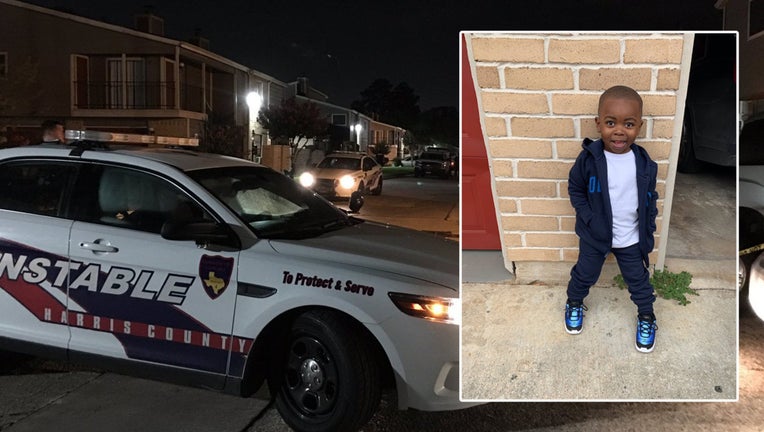 SPRING, Texas - A 2-year-old boy has been shot to death and two men are wounded after an apparent home invasion and robbery at a Texas apartment.

Family identified the boy as Ivory West Jr., known by family as "TJ".  The suspects in the shooting have not been found.

According to deputies, the boy, his father and his father's friend were sitting in the townhouse's open garage when two men walked up and began shooting.

The boy was shot and did not survive his injuries. His father was taken by Life Flight medical helicopter to Memorial Hermann Hospital - Texas Medical Center in critical condition. Authorities say the father may have been shot as many as nine to 10 times. Another man who was shot in the leg was taken by ambulance to a hospital.

The boy's mother was upstairs at the time with a 2-month-old baby. Investigators say she heard what she thought was fireworks and went downstairs, where a man held a gun to her head and demanded money. She told them she didn't have any, and the suspects fled.

Police say one of the suspects wore a black Nike jacket with gold lettering, a black cap and black pants. The second suspect was wearing a red cap and a gray shirt.

Investigators are asking anyone who lives in the area who has surveillance cameras to check their video from around 11:30 p.m. to midnight.

"And they really are crossing the line when they are out there committing these crimes. And again we are seeing way too much gun violence especially focused on our children. There was no reason that a 2-year-old had to be dead this morning."