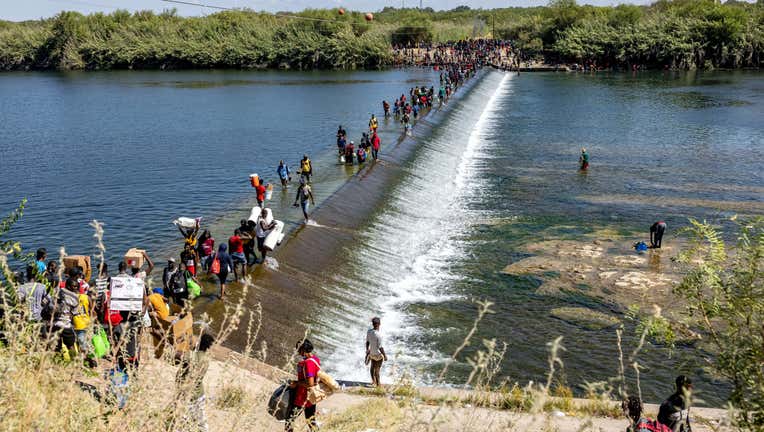 DEL RIO, TX - SEPTEMBER 17: Migrants walk across the Rio Grande River carrying food and other supplies back to a makeshift encampment under the International Bridge between Del Rio, TX and Acuña, MX on September 17, 2021 in Del Rio, Texas. The makesh

A letter released Monday signed by 26 Republican governors, including Doug Ducey of Arizona, Ron DeSantis of Florida, and Greg Abbott of Texas, asks Biden to schedule a meeting at the White House within the next 15 days so they can have an "open and constructive dialogue regarding border enforcement on behalf of U.S. citizens in our states and all those hoping to become U.S. citizens."

The governors said border apprehensions are up almost 500% compared to last year, and that approximately 9,700 illegal apprehensions have prior criminal convictions. They said more fentanyl has been seized this fiscal year than the last three years combined and that cartels and human traffickers are making millions by smuggling people and drugs across the border.

"Our immigration system may be complicated and complex, but the solution to ending the border crisis is simple and straightforward," they continued. "As president, you have the ability to take action to protect America, restore security, and end the crisis now."

The letter came a day after the U.S. government closed a portion of the southern border and started deporting hundreds of Haitian migrants who had been camped around a bridge in Del Rio, Texas, after crossing from Ciudad Acuña, Mexico.

The White House did not immediately respond to Fox News’ request for comment.