DETROIT - Last month's presidential debate offered voters an introduction to the Democratic field. Round two in Detroit promises to be more like an episode of the TV reality show "Survivor."

Spread over back-to-back nights, 20 White House hopefuls will take the stage at a crucial point in the Democratic primary.

For well-known candidates like Beto O'Rourke and Joe Biden, it offers a do-over following widely panned performances in Miami. But for struggling White House hopefuls, it could be a last chance to breathe life into a campaign before tougher debate qualification rules kick in that are all but certain to thin the field.

But a breakout moment could go a long way toward reversing those fortunes.

"Everything's at stake," said Jill Alper, a Democratic strategist who has worked on seven presidential campaigns.

Harris raked in donations and rose in the polls thanks to her searing critique of Biden's past stances on busing, while Castro's low-polling campaign got a boost at the expense of O'Rourke, a fellow Texan.

But it can flop, too. California Rep. Eric Swalwell aggressively went after Biden yet failed to leave a mark. Days later, he dropped out.

Interjections received annoyed looks and reprimands during the last debate on NBC News. This time, CNN says frequent interrupters will have their time reduced.

Not only will Sens. Bernie Sanders of Vermont and Elizabeth Warren of Massachusetts be standing at center stage, but it's also likely their progressive politics will be at the center of the debate, too. 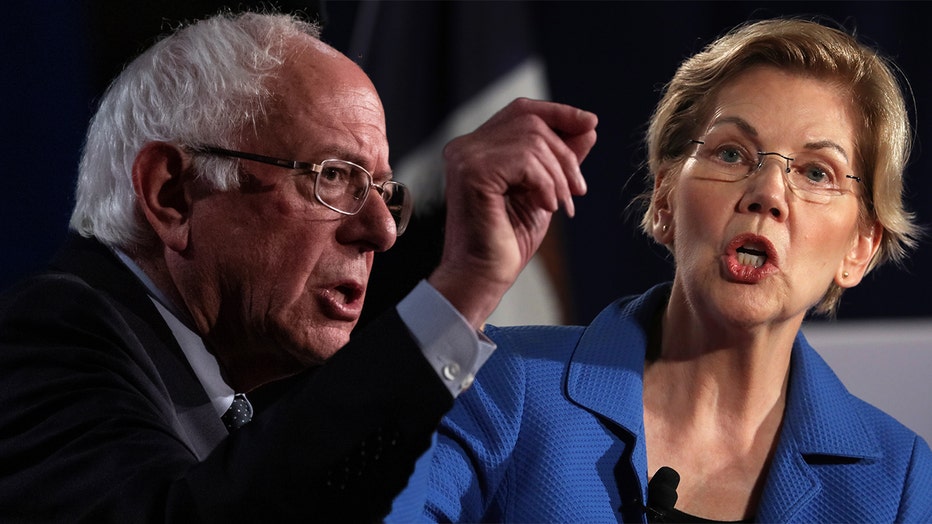 Bernie Sanders and Elizabeth Warren will square off at center stage during the first night of the second round of Democratic debates in Detroit. (Cheriss May/NurPhoto & Justin Sullivan / Getty Images)

Warren's campaign has gained ground in recent weeks, partially at the expense of Sanders. The debate could offer a high-profile chance for Warren to prove to Sanders' supporters that she's worthy of their consideration.

The two are vying for many of the same voters, but they are closely aligned on policy, leaving limited ground to attack each other.

Instead, look for attacks from centrists on the stage who are thirsting for a breakout moment, like Minnesota Sen. Amy Klobuchar and Montana Gov. Steve Bullock, or former Colorado Gov. John Hickenlooper, who has repeatedly railed against socialism.

In fact, Hickenlooper, who has struggled with fundraising and in the polls, has already indicated that he intends to draw a contrast with Warren.

Warren "has some big ideas that have an even bigger cost," he tweeted Monday. "We proved in Colorado that you don't need big, expensive government programs to achieve progressive goals."

The night will provide more moderate candidates, such as South Bend, Indiana, Mayor Pete Buttigieg, former Texas Rep. Beto O'Rourke and Minnesota Sen. Amy Klobuchar, another opportunity to position themselves as alternatives to the progressive platforms of Warren and Sanders.

Speaking of Sanders, just because he is onstage doesn't mean he's happy about it — at least according to a senior aide.

"I'm going to make a radical comment. This isn't a criticism of CNN. It's really a criticism of the media environment," campaign manager Faiz Shakir told CNN during a segment that aired Sunday. "I believe these debates tend to make the American people stupider. They are performative theater. And we don't end up having the conversations that affect people's lives."

Shakir added that Sanders would "try to go through it and answer the questions, respond to Donald Trump's tweets and all those kinds of things. But at the end of the day, this isn't, I think, how you win a campaign."

Pete Buttigieg will be the youngest candidate onstage. But he'll probably try to come across as the adult in the room.

The 37-year-old mayor of South Bend, Indiana, strives to be a postpartisan voice in a field dominated by partisan fights. He speaks eloquently about religion, being the first gay candidate to run a major presidential campaign, his military service and the need for generational change.

Often left out, though, are the specifics. That's given his critics plenty of ammunition in a primary where nitty-gritty policy differences have drawn an unlikely spotlight.

"He needs to put some meat on the bone," said David Axelrod, once a senior adviser to President Barack Obama. "We'll see if he has a second act. This debate will go a long way toward showing if he does."

O'Rourke had a rough outing last month, when Castro repeatedly attacked him over his signature issue — immigration. Looking for a comeback, O'Rourke has hinted that he will go after Buttigieg, who raked in $24.8 million and led the field in fundraising last quarter.

"No private planes for this campaign," the former Texas congressman said in a video last week that was filmed while O'Rourke was aboard a commercial plane waiting for takeoff. "We're putting your $5, $10, $15 to use and making sure we make the most out of every penny that's committed to this campaign."

Also on stage will be Ohio Rep. Tim Ryan, former Maryland Rep. John Delaney, author Marianne Williamson and Montana Gov. Steve Bullock, who joined the race after the other candidates and did not qualify for last month's debate in Miami.