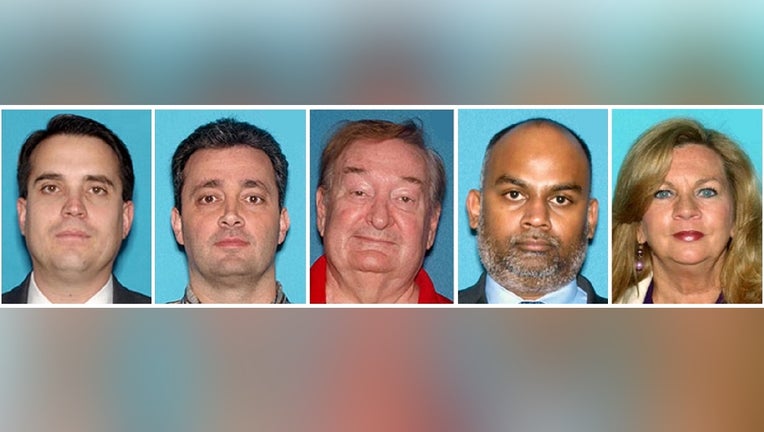 TRENTON, N.J. - Five public officials and former candidates, including the president of Jersey City’s school board, were charged with political corruption Thursday in a sting that stirred echoes of a large-scale bust 10 years ago in the same corner of the state.

New Jersey Attorney General Gurbir Grewal said in a statement that Jersey City School Board President Sudhan Thomas took thousands of dollars in bribes from a cooperating witness from May to July.

He and four other defendants are charged with accepting bribes from a cooperating witness in the form of campaign contributions, according to the attorney general. In return, they promised the cooperating witness that they would vote or use their authority or influence to hire his law firm for lucrative government legal work, Grewal said.

Thomas was in the news Wednesday after calling for the resignation of a school board member who had posted online questioning whether the attackers in the Dec. 10 shooting at a Jewish market might have had a point. Three people were killed in the market by two shooters authorities have said acted out of anti-Semitic hatred.

Thomas disputed the charges and said he would fight them. He criticized the attorney general’s office for targeting him and said it came in response to his filing a lawsuit against the state.

“I am not guilty and will be vigorously fighting the charges not just to prove my innocence but the massive cover up this AG’s office has embarked on,” Thomas said in a text message.

Attorneys for three defendants said their clients will fight the charges as well. It’s unclear who is representing Windish.

A message seeking a response to Thomas’ statement was sent to Grewal.

Thomas said Wednesday that he will seek to censure Joan Terrell Paige over online comments she made that questioned whether the attackers had a point in gunning down Jews.

Thomas condemned the post and said he would seek Paige’s resignation at a meeting Thursday, but a message posted on the school board’s website said the meeting had been canceled.

Grewal’s statement said that the defendants took tens of thousands in bribes offered in envelopes, paper bags and even a coffee cup stuffed with cash.

Dougherty said she would fight the allegations and called herself a person of “great integrity,” according to a statement sent by attorney Matthew Beck.

Cesaro denies the allegations and will aggressively defend against them, said his lawyer Robert Dunn in a statement.

O’Donnell, too, contests the charges and will plead not guilty, according to attorney Leo Hurley.

Dozens were convicted or pleaded guilty including two mayors and a state assemblyman, but two defendants were acquitted by juries and four others had charges dropped after a judge ruled federal extortion laws applied to elected officials but not to those running for office.