Smoke billows from site of fire at Port of Beirut

A column of black smoke billowed from the port with orange flames leaping from the ground. (Credit: Karim J Saadé via Storyful)

BEIRUT (AP) - A huge fire broke out at Beirut’s port Thursday, raising new panic among residents still struggling with the traumatic effects of the catastrophic explosion at the same site last month.

Some sought safety in closed bathrooms or threw open their windows to guard against shattering glass in case of another blast; others piled into cars to flee the capital.

Dark smoke and the smell of toxic fumes enveloped Beirut in the evening as army helicopters circled and sprayed water over the orange flames, helping firefighters on the ground. 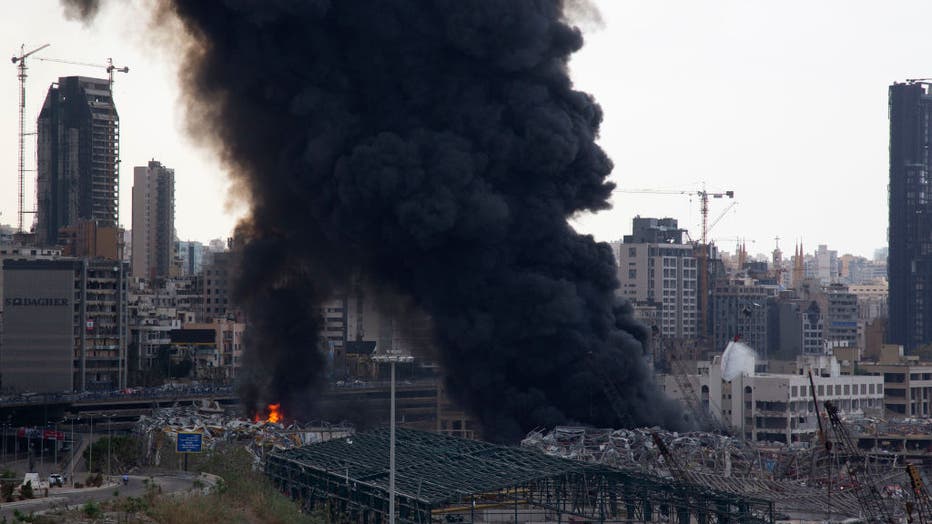 Smoke rises from a fire which has broken out at the Beirut Port on September 10, 2020 in Beirut, Lebanon. (Photo by Sam Tarling/Getty Images)

It was unclear what caused the blaze at the port, which was decimated by the Aug. 4 explosion when nearly 3,000 tons of ammonium nitrate blew up, sending out a shock wave that killed nearly 200 people and caused widespread damage.

The Lebanese army said the fire started in the port’s duty free zone amid containers of tires, oil and other flammable materials.

Fabrizio Carboni, regional director for the International Red Cross, tweeted that the warehouse on fire is where his organization stores thousands of food parcels and oil, risking the serious disruption of humanitarian operations.

Port director Bassem al-Qaisi told Voice of Lebanon radio that the fire started in a warehouse containing barrels of cooking oil and later spread to where tires were piled. He added it was too early to say if it began as "the result of heat or some other mistake.”

In a sign of the ever-widening gulf of distrust after the explosion, many Lebanese accused politicians of deliberately trying to destroy evidence at the port that led to the blast. Thursday's fire was the second mysterious blaze there this week, following a small fire on Tuesday that also caused some panic but was quickly extinguished.

Lebanon is gripped by an unprecedented economic crisis and financial collapse, blamed on decades of mismanagement and corruption by an entrenched political class. Last month's blast is seen as the culmination of leaders unable to to manage the country's affairs or protect its people. So far, authorities have been unable to provide answers about the explosion, and there has been no accountability for it.

For Dana Awad, a mother of two girls, the fire brought back memories of the tremor that shook her Beirut neighborhood before the explosion. 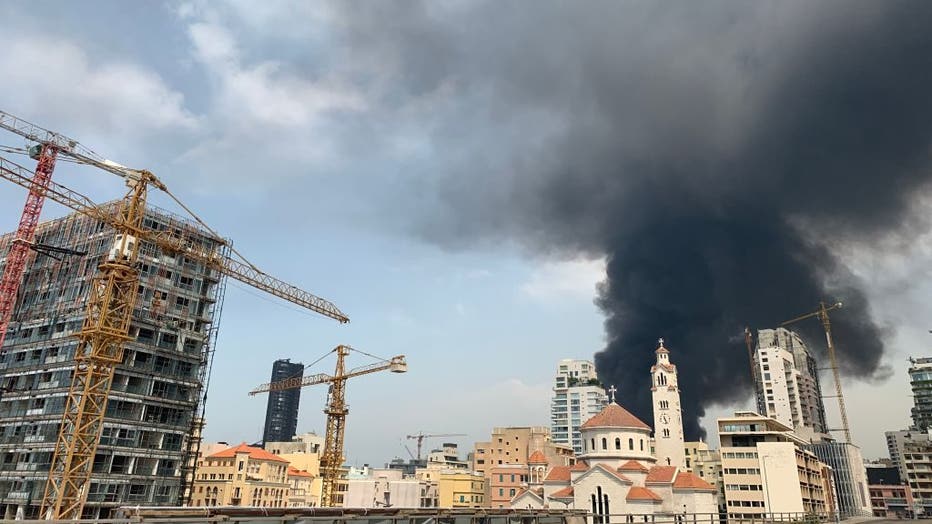 A picture shows smoke from a huge fire raging in Beirut port on September 10, 2020. - Thick black columns of smoke rose into the sky, as the army said it had engulfed a warehouse storing engine oil and vehicle tyres. (Photo by Joseph EID / AFP) (Phot

“We opened all windows and are in the corridor right now,” Awad said as they sought safety in a hallway. “I am still feeling the earth shake. Living a flashback.”

Jennifer Moorehead, Save the Children’s country director in Lebanon, said the fire will inevitably bring back distressing memories to many Lebanese children who are still trying to recover from last month's blast.

“Children in Beirut have experienced a terrible shock and they need time to recover; today’s fire and panic will only make things worse,” she said.

Najat Saliba, a professor specializing in atmospheric chemistry at the American University of Beirut, tweeted warnings for the elderly and children to protect themselves or even to leave the city if possible until the smoke cleared.

The raging fire and column of smoke was eerily similar to the one that preceded the devastating explosion. Back then, curious residents stood on balconies or behind windows in offices and homes to photograph the fire, compounding the injuries from flying glass when the gigantic fireball mushroomed across the city.

On Thursday, panicked residents cracked open windows and called or texted warnings to each other. Local TV stations said companies with offices near the port asked employees to leave the area. Some hid in bathrooms, while others dropped what they were doing and rushed home.

A video on social media showed port employees running from the fire, a chilling reminder of the dozens of workers and 10 firefighters who were killed in the blast. Lebanese troops closed the major road near the port and rerouted traffic.

A highway that runs parallel to the port was blocked with cars, some with terrified-looking women and children trying to flee. “Get out of my way!” one woman screamed at others blocking her path. A woman sitting in the car next to her covered her ears with her hands, looking traumatized by it all.

The panic was compounded by the fear that more chemicals could be in the wreckage of the port. Earlier this month, the army said it found more than 4 tons of ammonium nitrate in four containers stored near the port that it said were “dealt with.”

French and Italian chemical experts working in the remains of the port identified more than 20 containers of dangerous chemicals. The army later said these containers were moved away from the port and stored safely.

The Aug. 4 explosion, the single most destructive blast in Lebanon’s history, killed 191 people, injured about 6,500 and damaged thousands of buildings.