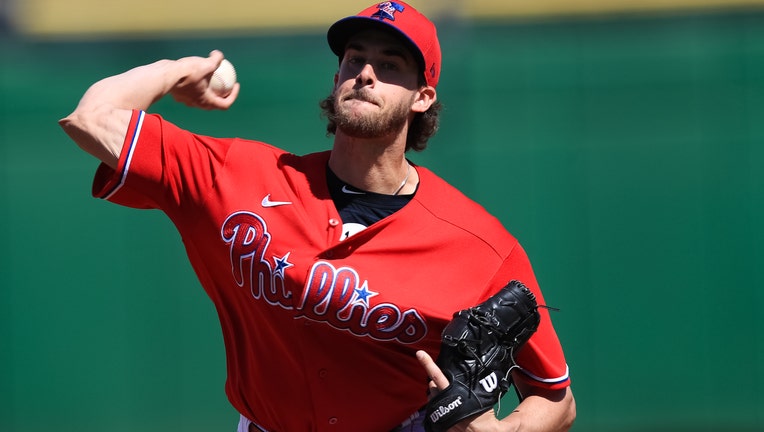 Aaron Nola #27 of the Philadelphia Phillies warms up prior to a spring training game against the Pittsburgh Pirates at Spectrum Field on February 23, 2020 in Clearwater, Florida. (Photo by Carmen Mandato/Getty Images)

PHILADELPHIA - Phillies ace Aaron Nola reported to camp on Monday after waiting a few extra days because he was in contact with someone who tested positive for the coronavirus.

“All my tests came back negative,” Nola said. “If you don’t have symptoms and you come in contact with somebody who ends up testing positive, you’re out for probably at least seven days. That could possibly be two starts. It’s obviously going to be a hard part of it. And sometimes it’s out of our control. We just have to try to do our part every day.”

The Phillies have had seven players and five staff members test positive for the virus. None has been identified.

Nola threw a bullpen upon arriving and would likely start Philadelphia’s season opener later this month if he’s ready. Nola finished third in NL Cy Young Award voting in 2018 when he was 17-6 with a 2.37 ERA. He was 12-7 with a 3.87 ERA last year.

“I was impressed by his bullpen (Monday) considering he hadn’t done a lot for a week,” manager Joe Girardi said. “It’s too early to tell where he’ll fit in. He would’ve been our opening day starter. I have to see where he’s at. I’m not saying he won’t be. I’m not ready to say.”

Nola said he is committed to playing this season amid the COVID-19 pandemic.

“Nothing has crossed my mind about opting out,” Nola said. “I want to play as bad as everyone else does. The guys who opted out, it’s understandable.”

The Phillies are scheduled to open the 60-game season at home against Miami on July 24.

Zack Wheeler, the No. 2 starter behind Nola, is in camp but uncertain about staying because his wife is due to deliver the couple's first child later this month.

“It’s a very difficult decision. It’s something that is still playing in my head. I have to be very careful here at the field, outside of the field, wherever I go,” Wheeler said. “The baby’s and Dominique’s health are most important to me. So whatever I can do to make sure they are safe, that is the No. 1 goal for me. Baseball comes after that.”