FOX 29's Shawnette Wilson reports from Abington Township, where a school board member is apologizing for her comments about armed school resource officers.

ABINGTON TOWNSHIP, Pa. - In Montgomery County, an Abington school board member is apologizing after receiving pushback for her comments about police-involved shootings and minority students.

Tamar Klaiman's comments came during January's school board meeting, where members were debating if school resource officers should be armed.

Klaiman spoke to the risk that students of color face when someone carries a firearm within a school district building.

“There’s a lot of evidence that anybody carrying a firearm in district building puts kids at risk, particularly students of color," Klaiman stated. "We know that black and brown students are much more likely to be shot by police officers, especially school resource officers, than other students."

"At the last school board meeting I made divisive and inflammatory comments about law enforcement that I regret and I'm deeply sorry about," Klaiman said. "The comment I made was in haste and very poorly communicated, but it was that fear that I was speaking, not to any specific Abington Police Department behaviors."

Klaiman emphasized that she supported Abington police, calling the department a leader in community policing.

"However, Abington is not immune to circumstances outside our community that affect people who live and attend school here," she added. 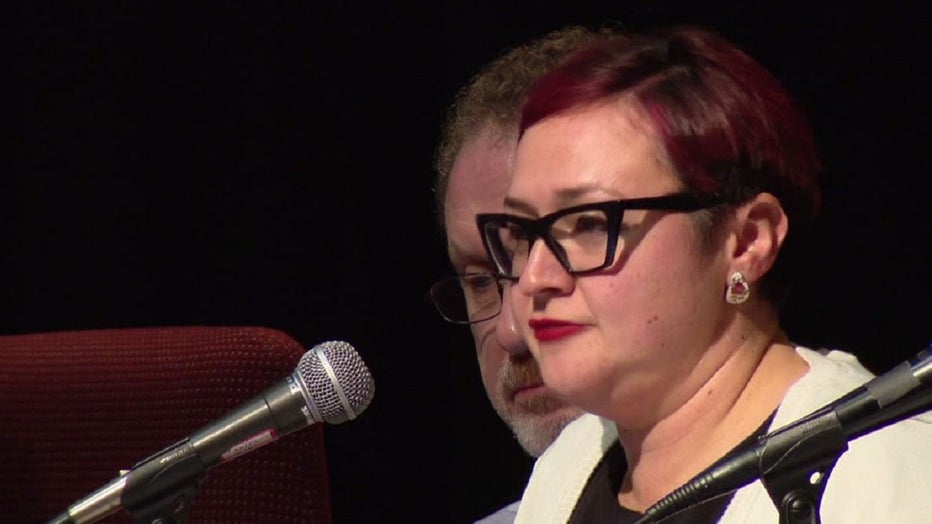 Community members showed up to Tuesday's meeting with signs, some calling for Klaiman’s resignation.

"Related to the false accusations made by Dr. Klaiman I was both saddened and appalled," one resident told FOX 29.

“Any time you say something as broad as people shooting kids of color you take those two groups and pit them against each other," said Lauren Jones.

Other residents voiced support for Klaiman.

“I accept Dr. Klaiman's apology and hope we can continue to learn and grow from this as a community," another resident told FOX 29.

Larry Jones addressed the school board, saying, "If you don't see me as somebody who can be pro-police and also know that there are still things wrong with the interaction, then you don't see me and you will never see me."

Jones' comments were met with applause from the audience.

District officials said the issue of armed school resource officers was not on the agenda that night and that Klaiman made the comments out of her own concern for school safety.

There are currently two armed school resource officers in the district.