'All of us are grieving': Attorney for suspect in deadly crash on I-95 says client is 'devastated'

Jayana Tanae Webb, 21, faces more than a dozen charges, including three counts of third-degree murder, three counts of homicide by vehicle while driving under the influence, and two counts of second-degree manslaughter of a law enforcement officer. She is accused of fatally striking Pennsylvania State Troopers Branden Sisca, 29, and Martin Mack, 33, and a 28-year-old pedestrian Reyes Rivera Oliveras on I-95 in Philadelphia.

PHILADELPHIA - The attorney for the suspected drunk driver charged in a deadly crash on I-95 in Philadelphia that killed two Pennsylvania state troopers and a civilian said his client is "devastated."

"Our prayers go out to the families of those who perished, those two brave officers and that pedestrian," Attorney Michael Walker said.

Walker is representing 21-year-old Jayana Tanae Webb who authorities believe was intoxicated when she rammed her car into Martin F. Mack, 33, and Branden T. Sisca, 29, as they assisted a pedestrian, 28-year-old Reyes Rivera Oliveras, off I-95 early Monday morning.

"This was a tragedy all the way around and I think all of us are grieving for those losses," Walker said. 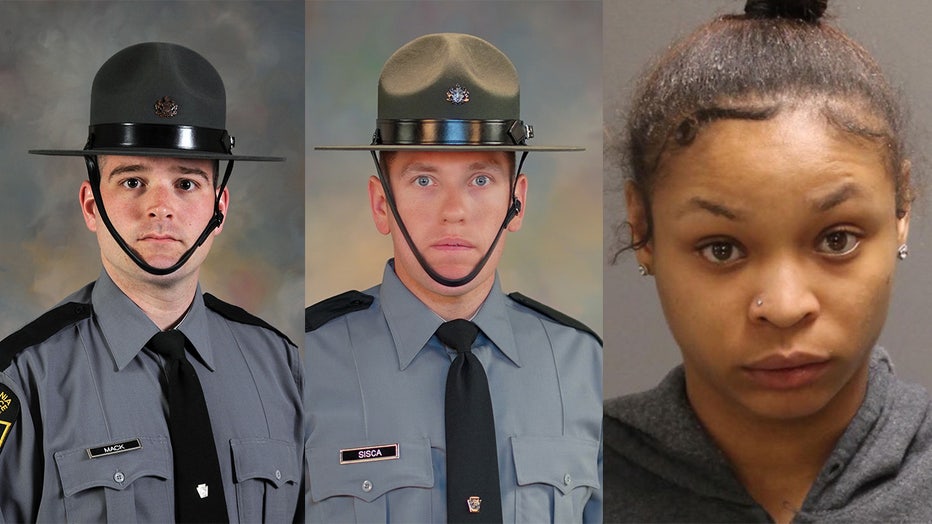 Authorities said the impact was so great that it sent the troopers into the northbound lanes of I-95. The striking vehicle eventually came to a rest in the right shoulder after it struck the troopers, civilian, police SUV and left-hand barrier. The driver, later identified as Webb, remained on the scene.

Sources said Troopers Mack and Trooper Sisca stopped Webb for speeding on northbound I-95 between the Girard and Allegheny exits shortly before she allegedly rammed into them.

A recording from the trooper's dashboard camera shows the stop lasted less than a minute before the pair was dispatched to a pedestrian walking southbound on I-95 near the stadiums, according to law enforcement sources.

Law enforcement sources say the deadly I-95 crash in Philadelphia that killed 2 Pennsylvania State Troopers and a civilian was captured on cameras position on Lincoln Financial Field. Investigators went to the Linc Wednesday to get a copy of the surveillance footage, sources said.

Webb appears to have documented the stop in a tweet posted just before the crash that read "why the cop pull me & he say im doing 110 ina 50." In a tweet from mid-January, Webb appeared to boast about her abilities to drive while intoxicated. "If you ask me, I’m the best drunk driver ever," the post reads.

Mack and Sisca exited I-95 at Allegheny Ave and traveled southbound to make contact with the highway walker later identified as Reyes Rivera Oliveras. Sources believe Webb happened to travel along the same path and eventually slammed into all three men in her 2014 Chevy Captiva.

Webb was lead out of Pennsylvania State Police Troop K barracks yesterday shackled in the handcuffs that belonged to Troopers Mack and Sisca. She was denied bail and had a preliminary hearing scheduled for Apr. 5.