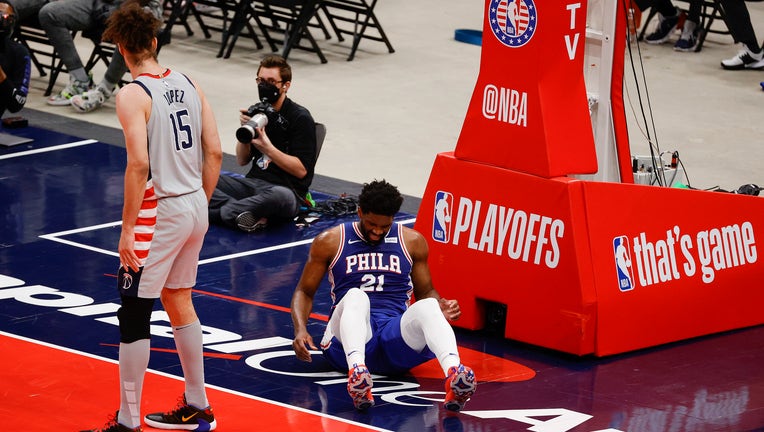 WASHINGTON, DC - MAY 31: Joel Embiid #21 of the Philadelphia 76ers lies on the floor during the first quarter against the Washington Wizards during Game Four of the Eastern Conference first round series at Capital One Arena on May 31, 2021 in Washing

The Sixers said the injury will be managed with physical therapy and a treatment program. Embiid is considered day-to-day going forward.

"An MRI, which was reviewed by several orthopedic specialists, revealed that Joel Embiid has a small lateral meniscus tear in his right knee," the Sixers said in a statement.

Philadelphia was poised for its first sweep since 1985 in Game 4 before Embiid was hurt and the Wizards rallied to win behind 27 points from Bradley Beal.

The NBA MVP finalist wound up on the floor behind the baseline after having his shot blocked by Washington’s Robin Lopez on a drive to the basket in the first quarter.

After staying down for a moment, a wincing Embiid rose and then put his hand on his lower right back.

He remained in the game for the time being, before eventually heading to the locker room in the last minute of the period.

Embiid came into the game averaging more than a point per minute in the best-of-seven series.

He scored a postseason career-high 36 points in 28 minutes in a 29-point win for the 76ers in Game 3 on Saturday.

The Sixers reached the Eastern Conference semifinal with consecutive 50-win seasons in 2018 and 2019 and bottomed out last season when they were swept in the first round by Boston. That sparked roster changes that brought in starters Danny Green and Seth Curry and backup big man Dwight Howard. The Sixers could start Mike Scott at center and keep Howard as the backup, or shift more minutes at the five to Ben Simmons.

"Obviously," Simmons said, "we need Joel to win. He’s a big part of this team."