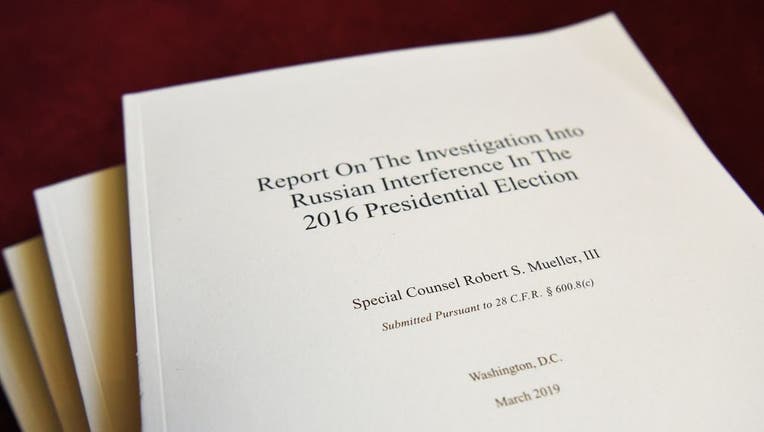 Copies of the "Mueller Report" printed by the US Government Publishing Office are seen at the US Capitol in Washington, DC on April 24, 2019. (Photo by MANDEL NGAN/AFP via Getty Images)

The D.C. Circuit Court of Appeals on Tuesday upheld a ruling that allows House Democrats to view secret grand jury information from Robert Mueller’s Russia probe that had been redacted from his report.

The court’s 2-1 decision agreed with a lower court that the House Judiciary Committee can obtain the information for impeachment investigations of President Trump under an exception for “judicial proceedings,” per the Federal Rules of Criminal Procedure.

“[B]ecause that exception encompasses impeachment proceedings and the committee has established a ‘particularized need’ for the grand jury materials, the order of the district court is affirmed,” Judge Judith Rogers wrote in the court’s opinion.

The lower court had claimed that precedent supported the idea that an impeachment trial is akin to a judicial proceeding, citing a case that allowed the disclosure of grand jury material for the impeachment investigation of President Richard Nixon.

Rogers noted that the exception to the grand jury secrecy rule applies in cases “preliminarily to or in connection with a judicial proceeding,” and that the party requesting it must show a “particularized need.”

The Department of Justice argued that the precedent the lower court cited was not binding, but the D.C. Circuit disagreed. The Circuit Court also agreed that the lower court properly used its discretion in determining that the possibility of new articles of impeachment stemming from the grand jury materials satisfied the requirement for a “particularized need.”

The court’s ruling also noted that the lower court properly concluded that the need to keep the information secret “is reduced by the committee’s adoption of special protocols to restrict access to the grand jury materials in order to maintain their secrecy.”

The DOJ, opposing the House Democrats, argued that because Trump had already been impeached and acquitted by the time the court was to rule, there was no longer a basis for the committee needing the information. The committee responded by claiming that their investigation was still continuing and that new articles of impeachment remained a possibility.

The DOJ has the option to now either petition for the case to be reheard by the entire D.C. Circuit in an en banc hearing, or immediately appeal to the U.S. Supreme Court. The department has yet to comment on their next step, and spokesperson Kerri Kupec said the DOJ is “reviewing the decision.”

Fox News’ David Spunt and Jake Gibson contributed to this report. Get updates on this story from foxnews.com.