FOX 29's Alex George has more on how Philadelphians remembered the Armenian Genocide after President Joe Biden became the first president to recognize the 1915 genocide.

PHILADELPHIA - Armenian-Americans in Philadelphia gathered on Saturday to remember the Armenian Genocide after President Joe Biden formally recognized the 1915 massacre of 1.5 million Armenians.

Hundreds congregated near the steps of the Philadelphia Art Museum and marched to City Hall to honor ancestral loved ones who experienced the genocide first-hand.

"My great-grandparents were survivors of the genocide and I wish that they were here right now to witness this because they definitely would have fallen apart. They deserved this a long time ago," one person said.

The Turkish government has long since denied their actions.

"People want the truth and when you don't educate them on the truth and you just dispel lies, the lies beget more lies and the genocide continues," one organizer said. "There is room for hope, but the Turkish government can not continue the denial." 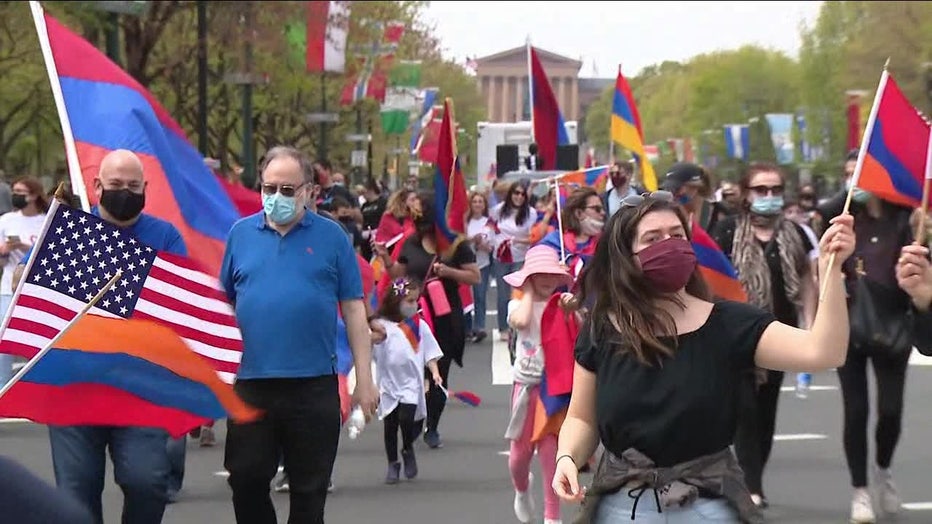 During the genocide, millions of Armenians fled the country and found refuge in nearby countries like Lebanon, Syria and the US.

It’s been decades since a US president has described the events that occurred in 1915 as ‘genocide’. President Ronald Reagan cited the Armenian Genocide in a 1981 proclamation.

"Today, as we mourn what was lost, let us also turn our eyes to the future—toward the world that we wish to build for our children," a White House statement read "A world unstained by the daily evils of bigotry and intolerance, where human rights are respected, and where all people are able to pursue their lives in dignity and security."

Philadelphia, and other cities around the United States, honored their Armenian heritage and remembered the victims of the genocide. On their march through the city, marchers stopped at the flag for a moment of silence.

"I got emotional walking down the street, that's our flag," Dr. Ala Chalian said. "But as an American, I realize the chance for me to stay an Armenian but also to be a good, strong American is because what this country allows."