BASTROP, Texas - Almost 50 years after an Army veteran left Vietnam, his wife got a surprise that blew her away. “It was very emotional, very emotional for me and my family and it just means the world,” said Pat Greeness who lives in the City of Bastrop.

It was only after Pat's husband, Robert Greeness, passed away that she began to learn more about his service as an Army medical specialist from his fellow soldiers. 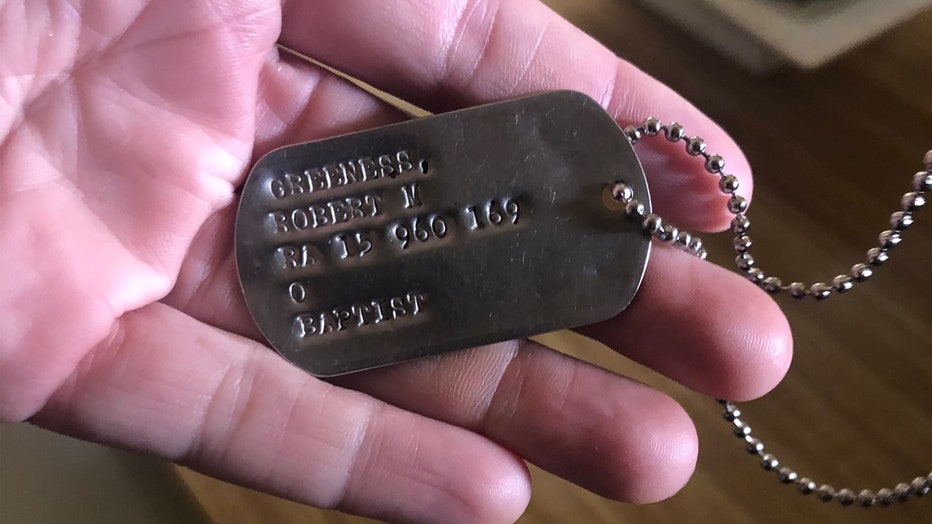 "Pat says Robert never spoke about his time in Vietnam, but he would constantly say how he wished he could get his dog tags back." (Jennifer Kendall on FOX 7)

“He was pronounced dead, and he was put in a body bag, and he had other bodies stacked on top of him and after a day or so somebody saw the bag move a bit and pulled him out,” Pat said about Robert’s last day in Vietnam. “That is when he said he lost the dog tags,” she added.

One year later, Robert met and married Pat in Bastrop, but anytime she asked about his time in the Army, he shut down. “The only thing he would mention about Vietnam was those dog tags,” said Pat.

The highly decorated veteran passed away from kidney cancer in 2016. Soon after, the awards from Robert’s time in the Army were gone. “My grandson took them to school for a Veteran's Day program and lost it,” Pat said.

Then, three years later, a surprise phone call changed everything.

Pat learned an elderly man in Vietnam held onto hope that he would return the tags to their rightful place one day. “He had them for fifty years from when my husband was wounded the final time, and he hung onto it and just decided it was time for them to come home,” said Pat.

Luckily, that man handed the tags to Chuck Ward, executive director of Vets with a Mission who was working with children in Vietnam at the time. Ward took the time to track down the owner of the dog tags. “He's been going over there forever, and he says that's never happened,” Pat said.

Three days after that voicemail, Pat held the tags in her hand for the very first time.

“It's just a little piece of tin, but it means the world,” said Pat.

Now she feels like a part of Robert’s life is finally back where it belongs. “Receiving these dog tags, I know he's looking down, and he's so happy. He's come full circle… Sometimes miracles do happen."

Pat bought a chain, so she can keep the dog tags close to her heart.

She said she will keep them as long as she's alive and then plans to pass them down to her grandchildren or donate them to the Bastrop Museum.