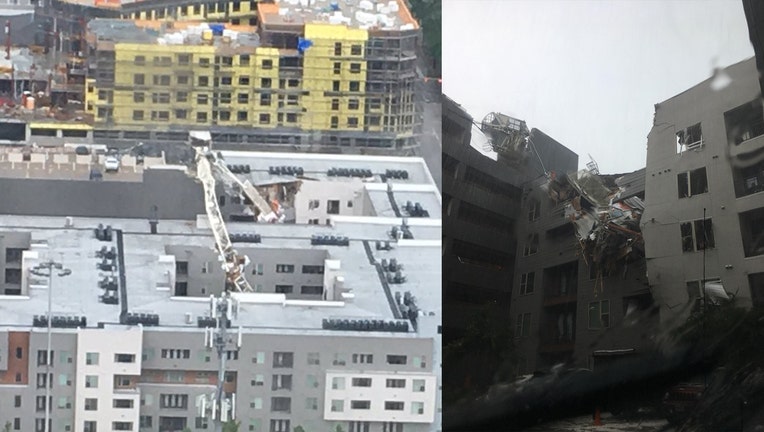 DALLAS, Texas - Authorities say at least one person is dead after a crane collapsed onto an apartment building in Downtown Dallas Sunday afternoon.

It is believed strong winds caused the crane to fall onto the Elan City Lights apartment building, located at 2627 Live Oak St.

Multiple agencies have been called to the scene to assist.

One woman was pronounced dead following the collapse, and as least six others were taken to Baylor and Parkland hospitals. Two remain in critical condition. Another person was treated and has already been released.

Search and rescue efforts are underway at the apartment building. Crews are said to be focused on the east side of the building, which is the same area where the deceased person was found.

“I opened the door and saw the debris. We thought it was a tornado. The crane was coming, he told me the crane was falling. We tried to run, barely made it. The man next to me broke his neck. I helped him out of his apartment, him and his dog,” one resident at the apartment said. “I’m just shocked, We’re thankful to get out of there. I can say God is on my side.”

“I’m highly grateful, I could have been dead. The man next door, I believe he sustained, like, very critical injuries to his neck. He could not move, he couldn’t stand. Two people had to grab him and take him out,” another resident said. “Everyone is just shook up right now.”

“I saw a couple people hanging off their windows trying to get out, bleeding. Someone said they couldn’t find their fiancé, someone else said their husband was stuck,” another resident said.

Jason Evans, with Dallas-Fire Rescue, said there were multiple collapses in different areas, including residential areas and the parking garage.

There are parts of the building where crews have not yet been able to search.

The parking garage collapsed and there are multiple vehicles inside, but authorities aren't sure if there were any people inside those vehicles.