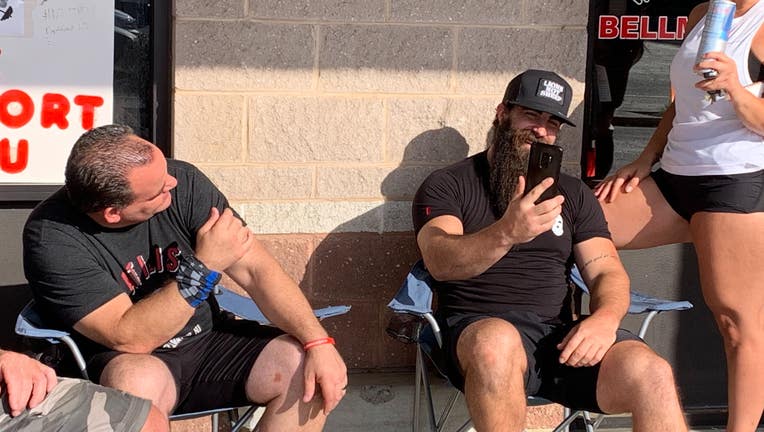 BELLMAWR, N.J. - The owners of a Bellmawr, New Jersey gym are facing charges after they were taken into police custody Monday morning following a months-long legal battle with the state over coronavirus shutdowns.

Ian Smith and Frank Trumbetti tell FOX 29 they were taken into custody early Monday morning and have since been released.

Smith and Trumbetti co-own Atilis Gym, which has previously opened in defiance of the state's shutdown order on gyms and fitness centers.

The Camden County Prosecutor's Office announced Monday morning that both Smith and Trumbetti have been charged with one count of fourth-degree contempt, one count of obstruction, and one count of violation of a disaster control act.

Authorities say a judge had issued a court order for the owners to vacate the gym and cease operations on July 24. From July 24 through July 27, authorities say a number of individuals were seen entering and using the gym in a direct violation of the court order.

The co-owners have long argued that the wording of the order would allow them to open up for members only, and not the general public. When the gym first reopened in defiance, gym staff had taped off workout stations and operated at 20% of the building’s capacity; meaning about 44 patrons at a time. They also were requiring patrons to wear masks unless they were in the middle of lifting weights.

"According to our beliefs, we have been allowing our members in because of the wording of Governor Murphy's executive order stating the gym had to remain closed to the public," Trumbetti said back in May. "We have stood firm, as long as we let members in, we are not doing anything that's against the law and criminal. The paperwork that's on the window, we don't know if it's actually deemed legal or not because they put it on in the middle of the night. We were not served with those papers."

Last week, Smith told FOX 29 New Jersey's Health Department had threatened to change their locks and shut them down.