The governor said at the press conference that any city in the state that defunds police departments will have property tax rates frozen at their current level, meaning those cities would not have increased property tax revenue if they defunded the police.

The proposal comes a week after Austin City Council announced that it would be cutting $150 million from the Austin Police Department's budget.

“Cities that endanger residents by reducing law enforcement should not then be able to turn around and go back and get more property tax dollars," Abbott said in the press conference.

The proposal comes a week after Austin City Council announced that it would be cutting $150 million from the Austin Police Department's budget. The total approved APD budget will be about $290 million, down from the $434 million that was in the proposed budget.

“Today, a group of all-white members of our state government, including Governor Greg Abbott, attacked the Black Lives Matter movement. Gov. Abbott could have held a press conference to express his support for the George Floyd Act. Instead, he held a press conference to fear-monger and lie in order to distract from the fact that 10,000 Texans have now died from COVID-19. Abbott has failed to expand Medicaid and provide healthcare to those who need it most. He is putting teachers and families at great risk by forcing schools to re-open without adequate protections and support. Abbott can’t even be bothered to call a special session to provide much-needed economic relief to millions of Texans who are being neglected by his administration during COVID-19.

In his press conference today, Abbott said “defunding law enforcement is never the answer,” yet the Governor himself requested a 4% cut to DPS recently, which amounts to $50 million - more than double that of Austin’s own immediate reallocation last week. The message from the tens of thousands of Austinites who made their voices heard in this year’s budget process was clear: We must decrease our over-reliance on police to handle all of our complex public safety challenges and instead reinvest in domestic violence shelters, mental health first responders, and more. That’s what our City Council did - and it’s exactly the work we’re committed to continue.” 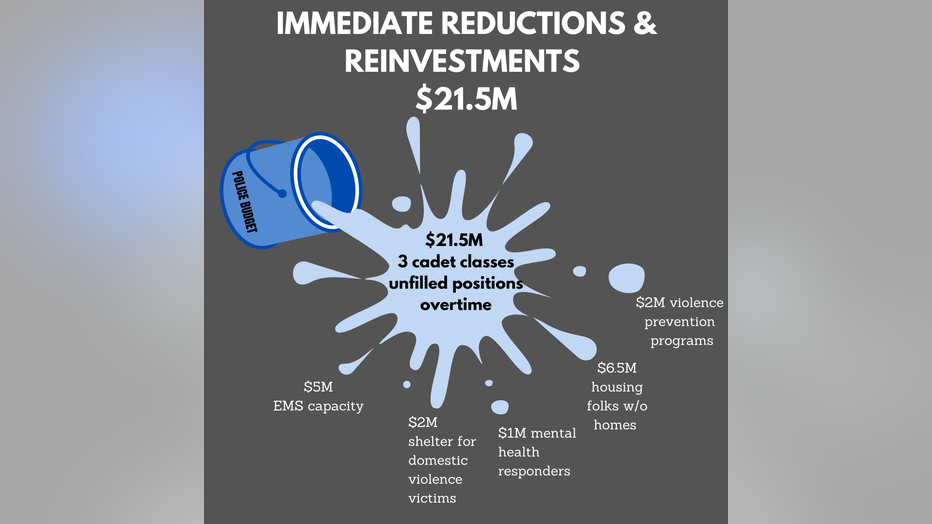 Bucket 1 involves immediate reductions and reinvestments to a total of $21.5 million. Three cadet classes will be delayed and unfilled positions and overtime will be cut.

"We cut about $20 million from the police budget, about 4 percent, about the same that I understand the governor requested be cut from the DPS budget last session," Adler said. "That $20 million was to have more money to spend to get people out of tents and into homes because our police shouldn't be spending so much of their time being social workers."

Texas Governor Greg Abbott visited Fort Worth Tuesday to announce a legislative plan that would freeze property tax revenue for any city that tries to defund police.

The cuts would then be reallocated in the following ways: 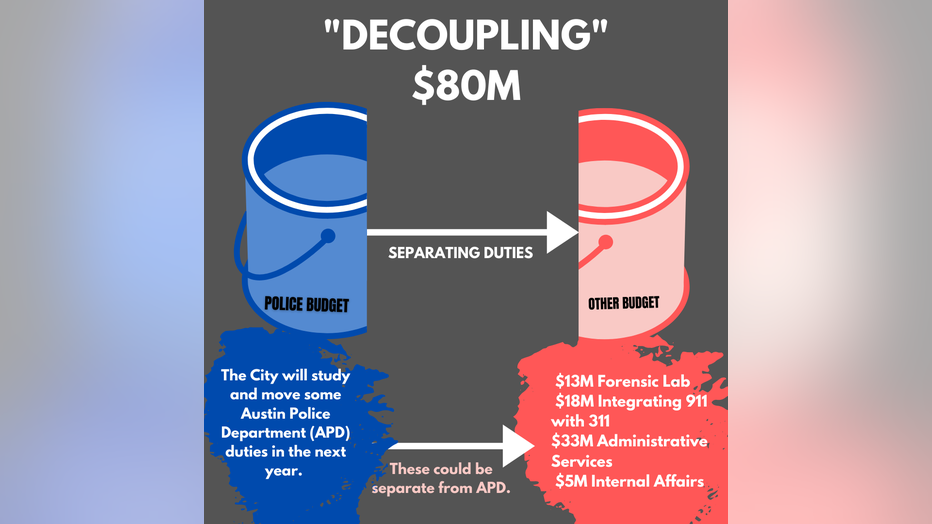 Bucket 2 involves moving some APD duties out of APD to the tune of $80 million, including:

"[Bucket 2] was to move certain functions to civilian control and independent status," Adler said. "No function was ended. No function was reduced. The City Council voted to not take a penny away from any of these functions." 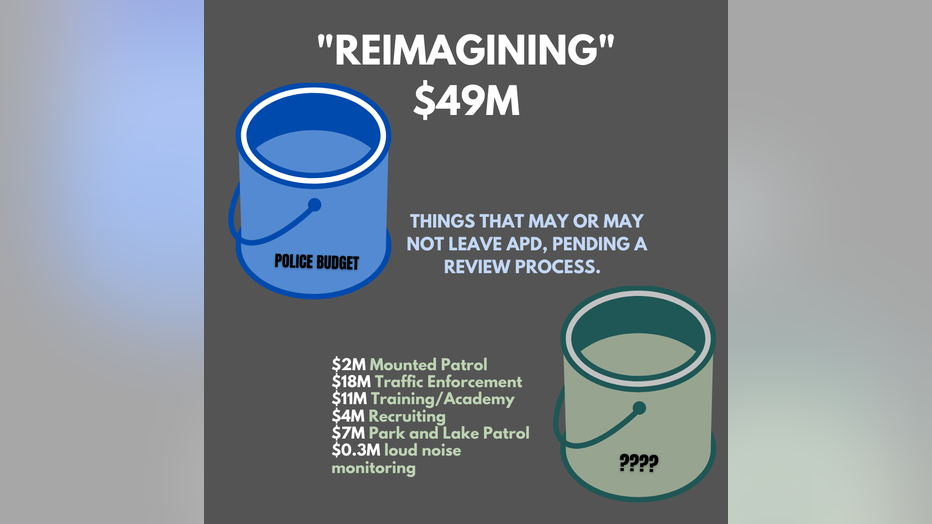 Bucket 3 addresses "reimagining" certain services in APD. A review process will look at services like mounted patrol, traffic enforcement, academy training, recruiting, park and lake patrol, and loud noise monitoring and see if those services need to be performed by an officer.

"These were not cuts, these were not things removed from the police department," Adler said. "In fact, there was no decision as to if, whether or not these functions should be changed, but we have started the work taking a look at those functions."

The Austin City Council has voted unanimously to cut the Austin Police Department's budget by millions of dollars.

Adler also addressed a recent Wall Street Journal analysis of crime statistics that claims Austin has seen the highest percentage increase in homicides compared with last year among the nation's 50 largest cities. However, in the same article, Austin ranks 14 with less than 100 homicides so far this year.

The article was referenced, according to Adler, in the press conference with Abbott.

"Three of the top seven cities in terms of increase are Texas cities, but among all the cities, Austin was the second-lowest homicide rate," Adler said. "Austin is a safe city."