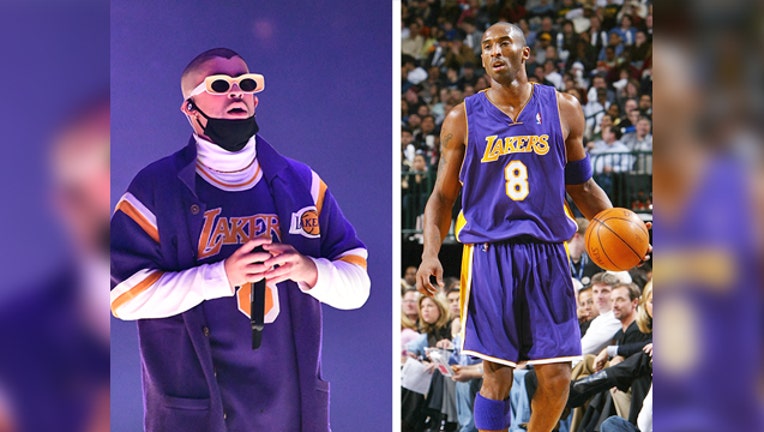 The Latino superstar, who is considered a pioneer of Latin trap music, released the two-minute track on SoundCloud late Monday night.

The track, which is a heartfelt dedication to the NBA legend, opens with sports announcers discussing Kobe Bryant’s incredible scoring record.

The song, which is in Spanish (as is much of Bad Bunny's music), has powerful lyrics referrencing Kobe Bryant's remarkable impact.

"You won 6 rings, 5 with the NBA and one in a marriage that gave you your daughters / Thinking that one of them left with you, got me outta control / But nah, it’s so you don’t play ball alone in heaven.”

As the song ends, Kobe Bryant is heard thanking his fans saying, “From the bottom of my heart, thank you. And what can I say? Mamba out.”

Bad Bunny, a Puerto Rico-native, has been a long time basketball fan and was devastated by the news of Kobe Bryant’s death.

“I would never have imagined that this would hurt me so much! I still remember the first time I saw a basketball game, at age 7 with my dad, and it was a game of this genius. From that day on he became my favorite player forever!! I have never mentioned it because it does not necessarily have to do with music, but this man has been an inspiration in many ways for me to be what I am today.”

Bad Bunny, whose real name is Benito Antonio Martínez Ocasio, is a long-time basketball fan who has been pictured in Los Angeles Lakers and Miami Heat gears over the years.

In the past, he has performed on stage with Lebron James and was pictured alongside James at other times.

Most recently, Bad Bunny was nominated for two Grammy's at the 62nd Annual Grammy Awards.