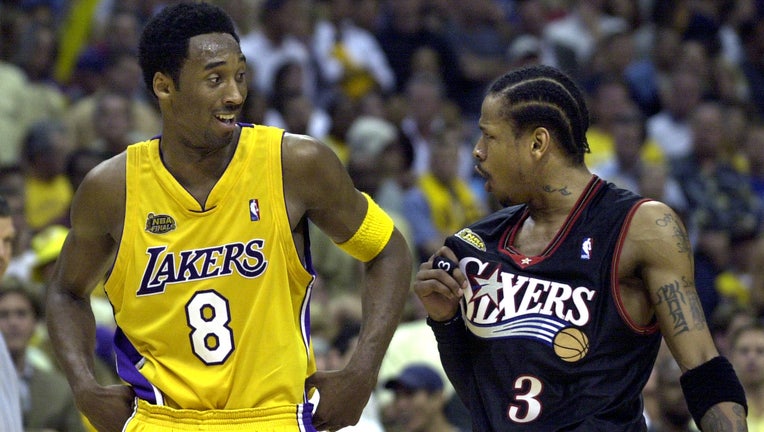 Lakers Kobe Bryant and 76ers Allen Iverson have a few words with each other at the end of the fourth quarter of the NBA Final game between the Lakers and the 76ers, Friday, June 8, 2001 at the Staples Center. (Photo by Wally Skalij/Los Angeles Times

Bryant, his 13-year-old daughter Gianna and seven others were killed Sunday in a Calabasas helicopter crash.

“Words cannot express how I’m feeling today,” Iverson wrote in a statement. “The only 2 words than ring in my head- devastated and heartbroken. I cannot seem to shake this feeling no matter what I’ve tried to do since hearing this yesterday.”

Iverson went on to say how many will remember he and Bryant competing against each other.

“It goes so much deeper than that for me,” Iverson wrote. “The story of us being drafted in arguably the deepest class of its kind ever in the history of the NBA can be debated for many years to come. However, his generosity and respect for the game is something that I witnessed first-hand every time we stepped on the dance floor to compete.”

Iverson extended his thoughts and prayers to Bryant’s family, as well as the families of the other crash victims.

“We are not okay,” Iverson wrote in closing. “But we will find the strength to pull through this together because that’s what Kobe would want us to do.”