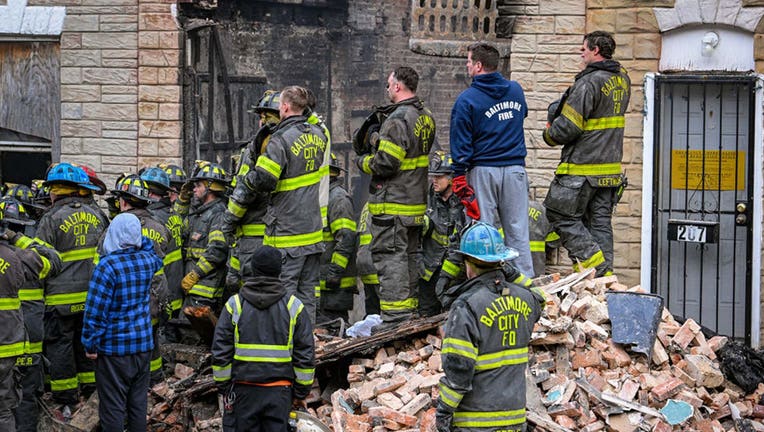 FILE - Baltimore City firefighters salute the body of Lt. Paul Butrim is taken from the scene of a vacant row house fire on S. Stricker Street. Four firefighters were trapped in a collapse while fighting the fire Monday morning.

A firefighter that was put on life support after he was injured battling a blaze in Baltimore, Maryland on Monday has woken up and is speaking, according to a tweet posted by the Baltimore Firefighters Union on Wednesday.

"He is still receiving care for his injuries, but appears to be on a good path. Our peer support team is by his side. He continues down his road to recovery. He & his family extend their sincere thanks to everyone," the tweet read.

John McMaster was the only one of four firefighters who survived a deadly fire that took place at a vacant home early Monday.

The home collapsed, leaving McMasters injured and killing three of his colleagues.

McMaster was pulled from the rowhome immediately and taken to the hospital, where he was listed in critical condition Monday afternoon.

"Today, Baltimore has lost three of the bravest among us," Baltimore Mayor Brandon Scott said on Monday. "Baltimore owes them the deepest gratitude and respect that we can offer anybody."

Photographs from the scene showed firefighters being consoled by their comrades. Later, an excavator cleared the remaining debris, leaving a gap between two rowhouses.

Three firefighters were injured battling a blaze at the same location in 2015, The Baltimore Sun reported.

The Associated Press contributed to this report. This story was reported out of Los Angeles.