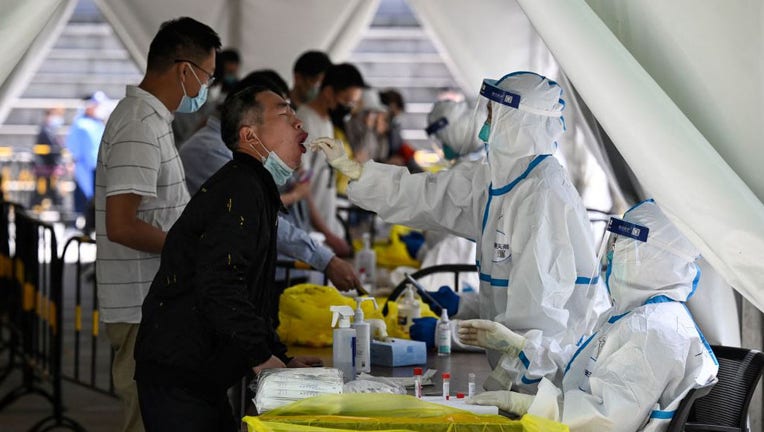 A health worker takes a swab sample from a man to be tested for Covid-19 at a testing site in Zhongguancun in Beijing on April 26, 2022. (JADE GAO/AFP via Getty Images)

BEIJING - Workers put up fencing and police restricted who could leave a locked-down area in Beijing on Tuesday as authorities in the Chinese capital stepped up efforts to prevent a major COVID-19 outbreak like the one that has all but shut down the city of Shanghai.

People lined up for throat swabs across much of Beijing as mass testing was expanded to 11 of the city's 16 districts.

Another 22 cases were found in the last 24 hours, Beijing health officials said at a late afternoon news conference, bringing the total to 92 since the outbreak was discovered five days ago. That is tiny in comparison to Shanghai, where the number of cases has topped 500,000 and at least 190 people have died. No deaths have been reported from the still-nascent outbreak in Beijing.

An initial announcement of testing in one Beijing district had sparked panic buying in the city of 21 million on Monday, but the situation appeared to calm on Tuesday even as testing was expanded. Public transport appeared to be running largely normally and roads were filled with commuters.

RELATED: China puts most of Shanghai on COVID-19 lockdown

"I’m not worried that Beijing would suffer from a shortage of supplies so I don’t plan to stock up," said Zhang Yifan, who was on his way to get tested in Dongcheng district. "Because if people stock up blindly, it may cause a waste of resources. If people keep too much supplies at home, it will cause a shortage."

Beijing has locked down some apartment buildings and residential complexes and on Monday added a larger urban area measuring about 2 by 3 kilometers (1 by 2 miles). Workers put up blue metal fencing along part of the area Tuesday, and police restricted who could leave. Residents are being kept inside their compounds.

Fears of a total lockdown have been fed by disruptions in the supply of food, medicine and daily necessities in Shanghai, a southeast coast business hub whose 25 million residents have only gradually been allowed to leave their homes after three weeks of confinement.

However, 86-year-old Beijing resident Chen Shengzhen said the capital had been given more time to prepare than its southern cousin.

Shanghai's lockdown "came all of a sudden, so the policies and other aspects were not able to be in place," leading to short-term hardships in the city, Chen told The Associated Press.

"My daughter works in a government department and they have prepared very well, such as beds, quilts, and articles for women’s use. Even if we need to go into lockdown, we will be fine," said Chen.

Shanghai residents, confined to their complexes or buildings, had trouble ordering food deliveries and also faced higher prices. The lockdown of China's largest city has had ripple effects elsewhere as goods have backed up at Shanghai's port, affecting factory production, global supply chains and China's own economic growth.

RELATED: China reports first deaths from COVID-19 in more than a year

Zhong Xiaobing, the general manager of the Lianhua Supermarket chain in Shanghai, said that shipments of goods from elsewhere in China have gotten smoother since the government organized trucks 10 days ago to bring in goods from key transfer stations, but that imports remain slower because of port and other transport restrictions.

Other cities have also been locked down in China as the omicron variant proves difficult to control, with Baotou in Inner Mongolia the latest to enforce one.

Beijing tested nearly 3.8 million people in an initial round of mass testing in Chaoyang district on Monday. All the results were negative except for one in a group of five that were tested together, a Chaoyang official said. Those five people were being tested to determine who among them is infected.

RELATED: China locks down city of 9 million amid new spike in COVID-19 cases

Chaoyang has had the most cases in the Beijing outbreak, but authorities decided to extend the testing to 10 more districts on Tuesday.