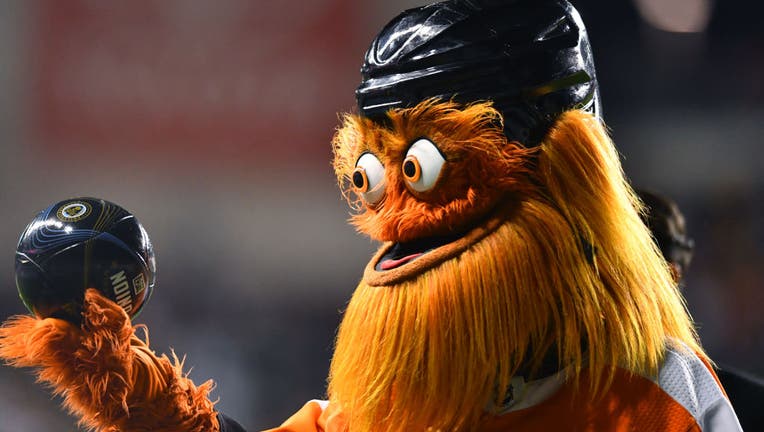 CHESTER, PA - SEPTEMBER 14: Flyers Mascot Gritty holds a soccer ball during the game between LAFC and the Philadelphia Union on September 14, 2019 at Talen Energy Stadium in Chester, PA. (Photo by Kyle Ross/Icon Sportswire via Getty Images)

PHILADELPHIA - One year ago, on Sept. 24, 2018, Gritty made his unforgettable debut at the Wells Fargo Center.

Since then, Gritty has made his mark in Philadelphia and beyond for his gregarious character and hilarious ways.

Most notably, Gritty is unmistakable with his bright orange fur and 7-foot-tall stature. Throw in a pair of wild, googly eyes, a squeaky belly button and hands and it’s no surprise that he has become a beloved peculiarity in Philadelphia.

Originally introduced as a mascot who would “take an active role in embracing the Flyers community outreach initiatives in the Greater Philadelphia Region,” Gritty has far exceeded expectations.

Reportedly discovered by the Flyers organization deep inside the Wells Fargo Center, Gritty’s first appearance was met with mockery by many on social media.

Some of the backlash was quite severe, as FOX 29’s Chris O’Connell noted in a tweet about a GoFundMe campaign advocating the demise of the mascot.

However, the Flyers stayed firm and said it “did the right thing” welcoming Gritty in an official statement.

“It me,” Gritty wrote in his first ever tweet, which has since been followed with a bevy of similar tweets giving insight into Gritty’s mind.

Now, his impact is resounding.

Gritty became a Philly icon and has firmly planted himself in the hearts of Philadelphians and people all over the globe.

The Philadelphia City Council formally welcomed Gritty, which made him the first Philadelphia mascot to be given the honor of receiving a resolution.

Philadelphians love Gritty so much that citizens created a petition to have his mural replace one of former Mayor Frank Rizzo.

Winning awards left and right, Gritty has been honored by the 2019 Webby Awards as the “People’s Choice Award for Social: Athletes and Sports Teams” and was named the “Best NHL Team Mascot” by more than 500 players in the NHL Players Association.

EA Sports’ NHL 20 even featured Gritty  in the 29th iteration of the classic sports video game.

To date, Gritty has made all kinds of special appearances and crashed his fair share of weddings and parties.

Loved by many, especially his young fans, Gritty has lived up to his mission of giving back to the community.

In June, Gritty surprised a young fan with a customized prosthetic leg.

Most recently, Gritty was caught on camera having a dance-off with a young fan that was donning a Gritty costume during a game at the Wells Fargo Center.

The Good Day Philadelphia crew also extended warm welcomes to Gritty’s and celebrated his prescence in the City of Brotherly Love by trying to look more like him. Mike Jerrick transformed himself into the mascot shortly after his debut.

Gritty’s subsequent appearances on Good Day have been chaotic but fun with the FOX 29 family meeting his shenanigans with equal effort.

It's been a year of fun and whacky memories with Philly's beloved Gritty, so here's to many more years of Gritty goodness.