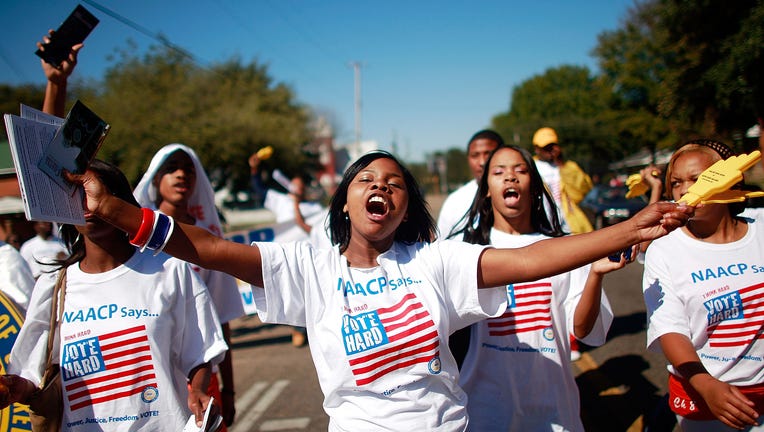 The Association for the Study of African American Life and History (ASALH) selected the theme to coincide with the 150th anniversary of the 15th Amendment, which granted black men the right to vote in 1870.

“The right of citizens of the United States to vote shall not be denied or abridged by the United States or by any state on account of race, color, or previous condition of servitude,” the 15th Amendment reads.

But states still found ways to disenfranchise black voters in the Jim Crow Era by implementing various intimidation tactics like poll taxes and literacy tests. The infamous “grandfather clause,” which was struck down by the Supreme Court in 1915, virtually made it impossible for black people to vote since it required their grandfather to have voted in a previous election.

Black Americans didn’t truly receive vindication in their fight for suffrage until decades later when the Civil Rights Movement was well underway, which President Donald Trump pointed out in his 2020 proclamation on Black History Month.

“This Amendment to the Constitution, ratified in 1870, prohibits the government from denying or abridging a citizen’s right to vote based on “race, color, or previous condition of servitude,” Trump said.

“Today, this guarantee is enforced primarily throughout the Voting Rights Act of 1965, an enduring legacy of Reverend Dr. Martin Luther King, Jr., and the Civil Rights movement.”

While the Voting Rights Act of 1965 was largely successful in helping black Americans overcome legal barriers that prevented them from voting on state and local levels, there are still remnants of Jim Crow-era laws on full display today in the deep South.

In 2013, The Supreme Court gutted a key provision of the Civil Rights Act, granting nine states, mostly in the South, clearance to change their election laws without advance federal approval.

Since then, nearly 1,200 polling places throughout the South have reportedly closed.

“Moving or closing a polling place, particularly without notice or input from communities, disrupts our democracy. It can mean the choice between picking up a child from school or voting,” Venita Gupta, president of The Leadership Conference on Civil and Human Rights told Reuters.

States have also purged voter lists, as with the case in Stacey Abrams 2018 bid for governor of Georgia, when the registration of 53,000 state residents, 70 percent of whom were black had their votes thrown out, according to The New Republic.

In Mississippi, civil rights groups are currently challenging the state’s lifetime ban on felons voting in court. The premise of their lawsuit argues that the state’s process to reinstate voting rights for convicted felons is discriminatory, and rooted in the Jim Crow era.

In 2016, black voter turnout declined significantly in key swing states, which ultimately contributed to Hillary Clinton losing against Donald Trump. However, recent polling shows that black Americans are more interested in voting this election season, which indicates the significant impact the black vote could have in 2020.