“I want to thank everybody for coming out tonight to honor the memory of two great kids,” said Neshaminy head coach Matt DeMatteo.

Pennsbury and Neshaminy ice hockey teams shared a special moment before a game Wednesday night. They honored the memory of two teammates who are no longer with them. 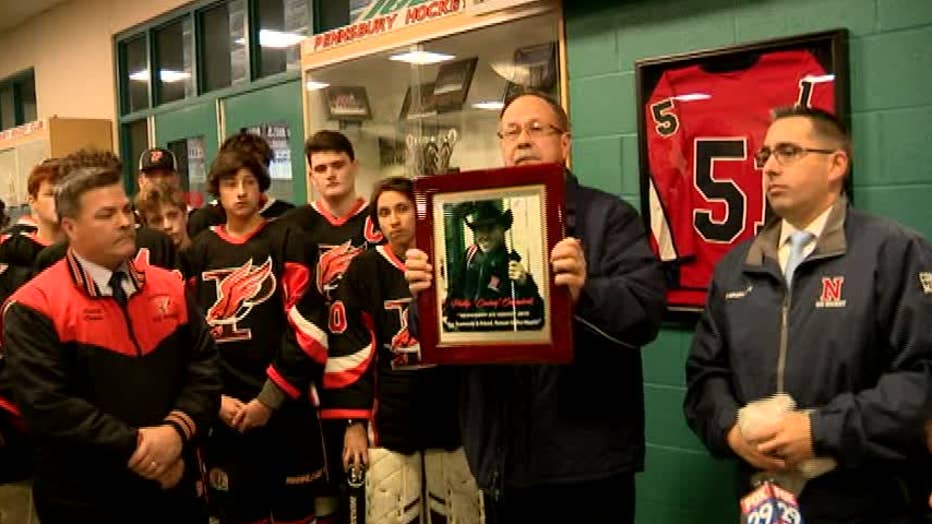 “Phil and Patrick played with a lot of kids on both sides so while we’re rivals on the ice we’re really great friends off the ice,” said DeMatteo. The game coincides with an event called the 2nd Annual Gannon Cup created and named for 13-year-old Patrick Gannon who died three years ago from injuries he suffered after falling at a SEPTA railroad trestle.

It's also a fundraiser for the Gift of Life. Inge and Mike Gannon donated their son’s organs.

"It was the hardest thing I've ever done but it was probably the most therapeutic. So other people can live and enjoy their families," they said.

In another emotional moment, the teams retired the jersey of 16-year-old Phil Oseredzuk who lost his life when he fell out of a kayak along Mill Creek during a storm. His family also donated his organs.

His mom, Lynn, unveiled the jersey during the ceremony attended by Phil's sister, grandfather and other family and friends. The President of the Neshaminy Hockey Club presented a picture of Phil to hang alongside Patrick's picture in Grundy Arena.

“He was just always so upbeat. Even the hockey coach said the hockey team wasn’t a hockey team until he arrived in the locker room with his cowboy hat, cowboy boots and his music saying come on guys let’s have some fun,” said Phil’s grandfather Glenn Garrison.

The families stayed for the game between Pennsbury and Neshaminy. Mike Gannon who also coached his son in ice hockey dropped the puck at the beginning of the game.

“To have my son’s name attached to this it’s therapeutic but it’s beyond words but thank God for this,” said Gannon.

For more information on the Gift of Life, please click here.

Vigil held for teen who died while kayaking in Levittown