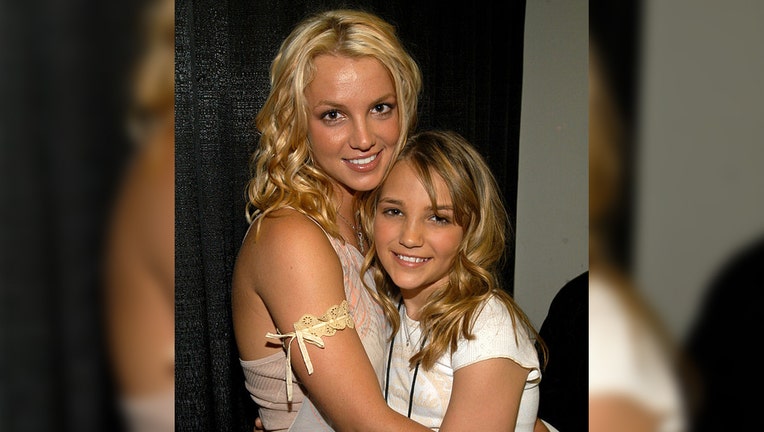 LOS ANGELES - Britney Spears is speaking out against her sister, Jamie Lynn Spears, saying that her sister wants to sell her new book at her own expense.

Jamie recently sat down for an interview on Good Morning America where she voiced "her side of things" in response to Britney's court conservatorship that controlled her life, money and affairs for nearly 14 years. In the interview, Jamie said, "I didn't understand what was happening… I was focused on the fact that I was a 17-year-old about to have a baby." During the interview, Jamie also promoted her new memoir, "Things I Should Have Said," which comes out Jan. 18.

In the memoir, Jamie wrote that she saw Britney's behavior change and used words like "erratic," "paranoid" and "spiraling" to describe her sister.

Supporters of the Free Britney movement were out in full force, celebrating the pop singer's end to her conservatorship.

In response, Britney on Thursday took to Twitter, writing, "2 things that did bother me that my sister said was how my behavior was out of control. She was never around me much 15 years ago at that time…. so why are they even talking about that unless she wants to sell a book at my expense??? REALLY???"

Britney was also taken aback by comments Jamie said about her performance at the 2017 Radio Disney Awards, where she performed a medley of remixes of Britney's songs. In the GMA interview, Jamie said she and her sister had cleared the air about the performance, and that she wasn't sure why Britney was upset about it in the first place, referencing a 2021 post on social media where Britney said she was "hurt… deeply" by the performance.

"I know it may sound like a silly thing to most people but I wrote a lot of my songs and my sister was the baby. She never had to work for anything," Britney wrote on Thursday. "Everything was always given to her! If you were me, you might understand asking for 13 years for remixes to go int a small venue show and on tours !!!! 13 years later they assign me as the MOTHER OF ALL … heart of gold … Britney sitting there seeing a 15 minute performance of everything I have ever wanted…. but see, I always was the bigger person. They all got to DO IT and PLAY ME and I always just sat there and took it. But see, now it's a joke … the last thing I would ever do is ask for what was just given to her !!! So yes, they did ruin my dreams. I do remember asking my sister why she did that when she knew I was waiting to change my show and her only words were ‘Well, it wasn’t my idea.'"

Britney went on to add, "Hope your book does well, Jamie Lynn!"

The pop star also took a few stabs at her entire family, writing "My family ruined my dreams 100 billion percent and try to make me look like the crazy one." She added, "My family loves to pull me down and hurt me always so I am disgusted with them!"

Britney also wrote that she was sick Wednesday night with a 104-degree fever, chills and body aches, but added that she was feeling better on Thursday.