PHOENIX - Russia freed WNBA star Brittney Griner on Thursday in a dramatic high-level prisoner exchange, with the U.S. releasing notorious Russian arms dealer Viktor Bout, American officials said. The swap, at a time of heightened tensions over Ukraine, achieved a top goal for President Joe Biden, but carried a heavy price — and left behind an American jailed for nearly four years in Russia.

The deal, the second such exchange in eight months with Russia, procured the release of the most prominent American detained abroad. Griner is a two-time Olympic gold medalist whose monthslong imprisonment on drug charges brought unprecedented attention to the population of wrongful detainees.

RELATED: Who is Viktor Bout, Russia's 'Merchant of Death' freed in prisoner swap for Brittney Griner?

Griner was facing a nine-year sentence on drug smuggling charges after cannabis vape cartridges were found in her luggage at a Moscow-area airport.

After weeks of negotiations, the decision was to move forward with a one-for-one prisoner swap for international arms dealer Viktor Bout.

"The president needed to know that if he was going to make a tough decision to strike the right agreement to return Brittney, that Congress and the American people would have his back," said Arizona Rep. Greg Stanton.

"Moments ago I spoke to Brittney Griner," President Joe Biden tweeted. "She is safe. She is on a plane. She is on her way home."

According to Evelyn Farkas with the McCain Institute, the Mercury star's arrest was a strategic move.

"They seized Brittney Griner just days before …the Russian government invaded Ukraine again, and they knew what they were doing, and they were taking her hostage," Farkas said.

After 10 months behind bars, the U.S. announced her return in exchange for notorious arms dealer Viktor Bout.

"The bad news is that Paul Whelan remains imprisoned, and so the US government has to continue the fight to get him released," Farkas said.

The swap was highly scrutinized, as US Marine Paul Whelan, who was convicted on espionage charges, is still in Russian custody.

U.S. Congresswoman Sheila Jackson Lee, who worked on the deal, assured Americans that they're safe.

"This arms dealer has already served more than half of his sentence, he is no longer technologically relevant," Lee said. "Wherever he goes, we will have an understanding, meaning our operatives will know where he is. But I can assure you that this is not a threat to the United States."

It was an emotional day for fans, politicians, professional athletes and Americans as the basketball player finally stepped foot on US soil.

Jackson says she prayed every day for her return.

"I just wish I could give her a great big bear hug and just tell her I love her," Jackson said. "It’s the best Christmas present I could ask for."

Secretary of State Antony Blinken was there in the Oval Office as Brittney's wife Cherelle spoke to her, knowing she was coming home.

"Listening to them connect since the first time since Brittney was freed was as moving as it was unforgettable," Blinken said.

Vince Kozar, president of Phoenix Mercury, says there is a sense of both joy and relief among the organization.

"The uncertainty for everyone surrounding this has probably been the hardest part, and the worry for her," Kozar said.

One fan spoke to FOX 10, saying she is a season ticket holder and cried when she heard the news.

"When I first heard Brittney was coming home, I thought, ‘ It’s about time,'" said Sasha.

"I cried," said Danae. "I was really excited. My wife told me this morning and I just felt a sense of relief."

Griner's arrest brought attention to the WNBA and how players have to play overseas during the offseason to make more money.

"We got to do better for these women," Danae said. "There's no reason Brittney should have to go to Russia to play."

Danae, a season ticket holder, pointed out some of the struggles WNBA players face.

"I can go buy 10 of her jerseys right now and she wouldnt get one penny from those sales," she said.

"It's good, it's a step in the right direction," said Sasha. "At the end of the day, it's another American that should have never been there. [She] was wrongfully detained, and we've got to get them all back."

"Miraculously, mercifully, the count of days detained has ended at 294, and our friend, our sister is headed back home where she belongs. The emotions for our organization, just like for our fans and so many across the world, are those of joyous celebration, deep gratitude, grief for the time lost, and sincere hope for all families still awaiting the return of a loved one. BG's strength in this process, her unwavering belief that resolution would come, and the hope she displayed every day is what kept all of us believing this day would come. We are eternally grateful for the combined work of President Biden and Vice President Harris and the Administration, the Special Presidential Envoy for Hostage Affairs, to Cherelle Griner, Ray and Sandra Griner, Brittney's agent Lindsay Colas, Brittney's Russian counsel, the WNBA and Commissioner Cathy Engelbert, the WNBA Players Association, and everyone – from players to fans to media – who kept Brittney's story top-of-mind. The fight to bring her home has illustrated the power of the WNBA, its players, platform, and mission. We no longer have to Bring BG Home – she’s on her way."

"Today, we are breathing a deep sigh of relief. Brittney Griner is on her way home.

We are overwhelmed with gratitude to President Biden, Vice President Harris and the entire Biden-Harris Administration, including Secretary of State Antony Blinken, National Security Advisor Jake Sullivan and the members of The White House National Security team, along with the entire Special Presidential Envoy for Hostage Affairs team at the U.S. Department of State, led by Roger Carstens and including Fletcher Schoen. In addition, we remain forever grateful to Governor Bill Richardson and Mickey Bergman from the Richardson Center, and BG’s tireless Russian legal team, Maria Blagovolina and Alex Boykov.

In equal measure, we are so thankful to the incredible community of advisors, athletes and advocates, led primarily, and as has come to be routine, by the players of the WNBA and their fearless Union, The WNBPA. Thank you also to BG’s teams, the Phoenix Mercury, USA Basketball, UMMC Ekaterinburg, the WNBA and the NBA. We’d also like to personally thank Casey Wasserman and our internal Wasserman WE ARE BG team that showed up in big ways when our friend and client needed it the most.  Also, to so many people around the world who raised their voices and stood with us - especially Black women, the LGBTQ+ community and civil rights leaders - thank you.

It’s through hardship that character is revealed, and over the last nine months, we have seen the best of so many. At the top of that list are BG and President Biden. Throughout this ordeal, BG has carried herself with courage, grace and grit; and President Biden made us a promise, and then kept his word and did what was necessary to bring her home.

We are forever grateful for his follow-through on that commitment.

In return, our commitment to President Biden and to the families of Americans who are being held hostage and wrongfully detained – especially Elizabeth and David Whelan, on behalf of their brother Paul Whelan, who remains in Russia and whose continued detention weighs heavily on our hearts – is to continue our work in the movement to bring them home.

Our eyes have been opened through this process to your struggle and as we have always done, BG and our coalition of activist athletes will ensure that silence is no longer an option. Your stories will be told, your loved ones' names will be known, and you will be reunited, because bringing our people home is a moral issue that matters to this Administration. It should matter to all Americans. As patriots, our obligation is to use all available tools to end the needless suffering of Americans and their families.

WE ARE BG was conceived to celebrate the ways that BG represents all of us, and express why her fight is all of ours. WE ARE BG will endure as a coalition to advocate for Americans who need to be returned home, including:

Thank you again to each of you who signed our petition, wrote, called, prayed, posted, advised, and advocated. Your effort mattered, and BG will be home to her family for the holidays because of you."

"Grateful for the long-overdue release of Brittney Griner today from Russian custody. Kudos to @POTUS and his administration for the difficult diplomatic work involved to make it happen. We’re looking forward to having Brittney back home."

"Brittney Griner is coming home. Today is a good day."

"Brittney Griner's release from Russian detention is wonderful, welcome news for Arizona and our entire nation. Following her wrongful detainment earlier this year, we've closely engaged with @StateDept and introduced a bipartisan resolution calling for Brittney's release. I know we're all relieved the day has come. Arizona – and America – welcomes her back with open arms."

"This unjust detention is over and Brittney Griner is coming home. I’m so happy for her wife Cherelle and their whole family. Thank you to everyone who advocated for Brittney’s release and to the State Department and White House who worked so hard to make this happen."

"After nearly 300 days, Brittney Griner is coming home. This is the day we worked towards and prayed for."

"Today is a joyous day. Thanks to the relentless efforts by the Biden Administration, Brittney Griner is coming home. We never gave up hope and continued to push the White House to free her. I hope Brittney enjoys much-deserved rest with her family—safely back in the U.S."

"I'm grateful for the news that Brittney Griner will make her safe return to the US. The Biden admin and many public servants who achieved this moment deserve our gratitude and praise. Together, we'll continue our work to end the wrongful detainment of Americans abroad."

"The best news to start our day with: finally, our sister BG is coming home!! So grateful for all those who tirelessly worked to make this happen. Welcome home, Brittney!!!!"

"Brittney Griner is finally coming home! THANK GOD! So happy for her and her family."

"Brittney Griner is free! After 294 days in Russian captivity, @POTUS negotiated a "one-for-one" prisoner swap. Thank you to President Biden, and to all those who worked so hard to secure her freedom." 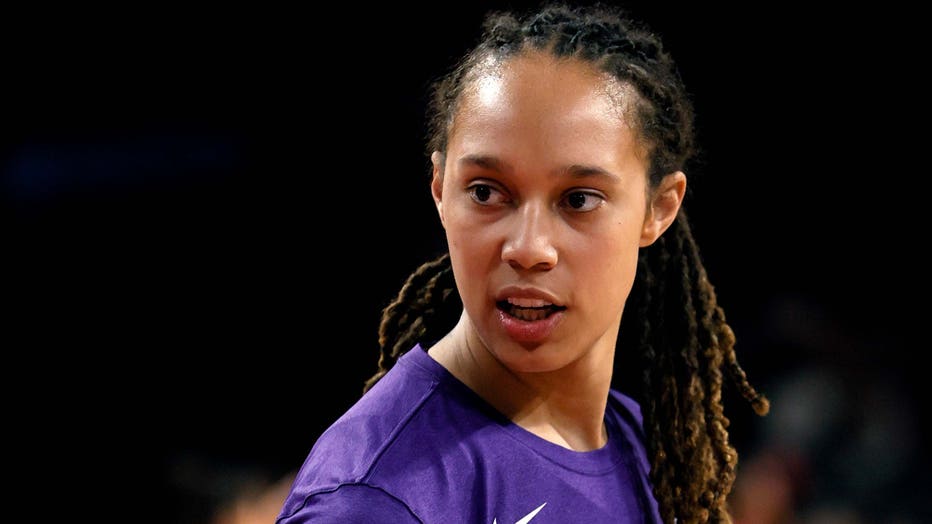 LAS VEGAS, NEVADA - SEPTEMBER 30: Brittney Griner #42 of the Phoenix Mercury warms up before Game Two of the 2021 WNBA Playoffs semifinals against the Las Vegas Aces at Michelob ULTRA Arena on September 30, 2021 in Las Vegas, Nevada. The Mercury defe (Photo by Ethan Miller/Getty Images)