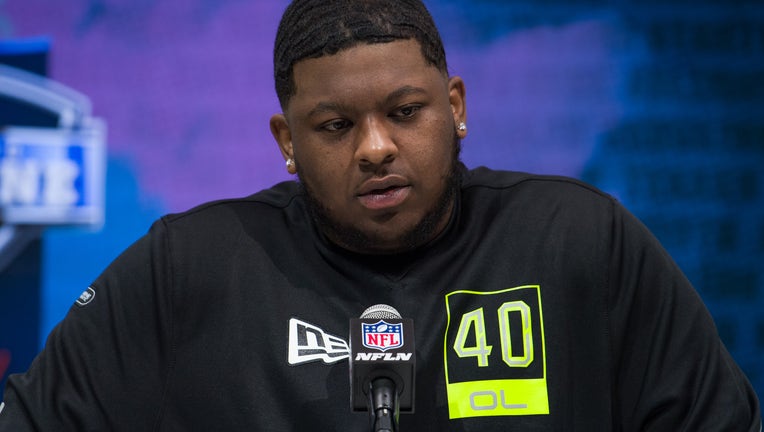 INDIANAPOLIS, IN - FEBRUARY 26: Michigan offensive lineman Cesar Ruiz answers questions from the media during the NFL Scouting Combine on February 26, 2020 at the Indiana Convention Center in Indianapolis, IN. (Photo by Zach Bolinger/Icon Sportswire

CAMDEN - Camden, New Jersey native Cesar Ruiz was selected by the New Orleans Saints in the first round of Thursday night's 2020 NFL draft.

Ruiz, a 20-year-old offensive lineman, attended Camden High School before transferring to IMG Academy in Florida after his Sophomore year.

As a senior, Ruiz was named an Under Armor All-American and recognized as the top center in his class. He received offers from Florida, Auburn and LSU, but ultimately chose the University of Michigan.

Ruiz spent three seasons at Michigan before declaring for the NFL Draft. The Saints selected the 6-foot-3, 307-pound lineman with the 24th overall selection.

The Saints, however, value linemen who have versatility and coach Sean Payton made it clear that Ruiz will have an opportunity to compete for a starting role at any of the interior line positions.

“We weren’t drafting someone that high to come in and be a backup,” Payton said. “He was one of the better interior linemen I’ve seen in a while.

One constant in this unique NFL draft: Joe Burrow at the top