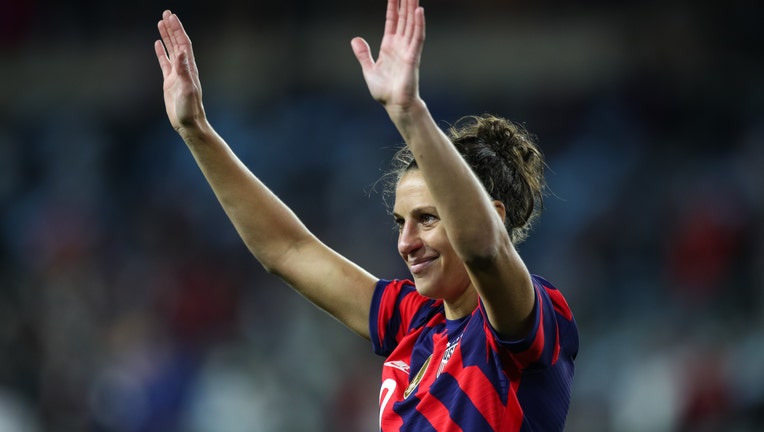 ST PAUL, MN - OCTOBER 26: Carli Lloyd #10 of United States waves to fans after her final game as a member of the US Women's National Team at Allianz Field on October 26, 2021 in St Paul, Minnesota. United States defeated Korea Republic 6-0. (Photo by

ST. PAUL, Minn. - Carli Lloyd didn't score in her final game for the United States, but it hardly mattered. The night was all about her.

Fans chanted Lloyd’s name before Tuesday night's match, a 6-0 U.S. rout of South Korea, with one holding a sign that read: "One More World Cup, Please?"

Lloyd is retiring after a career that includes two World Cup titles and a pair of Olympic gold medals. Her crowning moment was scoring three goals in the opening 16 minutes of the U.S. victory over Japan in the 2015 Women’s World Cup final.

"It’s been emotional. But there’s just a sense of peace and contentment that I feel — it’s just joy and happiness," Lloyd said. "It’s been an amazing journey and I gave it all I had, and now I can walk away into the next chapter."

Lloyd’s final match was her 316th with the national team, the second-most international appearances of any player. She scored 134 goals for the United States, third most in team history, along with 61 assists.

Lloyd was subbed out in the 65th minute and sobbed as she left to a standing ovation by the crowd of 18,115 at Allianz Field. She removed her cleats and pulled off her jersey, revealing another jersey with her married name, Hollins, emblazoned on the back.

"Somebody said that Carli is the U.S. women’s national team. She’s brave. She’s relentless. She’s determined, intense and just doesn’t take no for an answer," U.S. coach Vlatko Andonovski said. "She just pushes through and finds a way. So I think that she’s a great representative of what this team is all about."

Lloyd, 39, had hinted she was nearing the end of her career before the Tokyo Olympics. The United States won the bronze medal this summer, with Lloyd scoring a pair of goals in a 4-3 victory over Australia. She announced plans to retire shortly thereafter.

She became the first American to score in four different Olympics, and her 10 goals in the event are the most for a U.S. player.

Following the team’s 0-0 draw last week against South Korea in Kansas City, Kansas, Lloyd passed her No. 10 jersey to Lindsey Horan, who will wear the number starting in 2022.

Lloyd made her first appearance with the national team in 2005.

At the 2008 Beijing Olympics, Lloyd scored in a 1-0 overtime victory over Brazil for the gold medal. Four years later, she scored both goals in the gold-medal match against Japan at Wembley Stadium, becoming the only player to score winning goals in consecutive Olympic finals.

Lloyd's career reached its high point with her hat trick in the World Cup final. Her third goal against Japan was a blistering strike from midfield.

"The way I feel now is literally the happiest I’ve ever been," Lloyd said. "And I think having a really tough career and really having to dig deep, the end feeling has been the most rewarding."

A New Jersey native, Lloyd has also played at the club level for some 12 years, spanning stints in the now-defunct Women’s Professional Soccer league and the National Women’s Soccer League. She will finish off her pro season with the NWSL’s Gotham FC, which has two games left in the regular season.

Against South Korea on Tuesday, Horan put the United States in front in the ninth minute with a goal that deflected off an opposing player. It was her 24th career goal.

An own goal put the Americans up 2-0 just before halftime.

Alex Morgan, who replaced Lloyd, scored in the 69th minute to make it 3-0. Megan Rapinoe added a goal in the 85th and Rose Lavelle scored in the 89th. Lynn Williams capped the scoring in stoppage time. The U.S. extended its unbeaten streak on home soil to 62 matches.

"I’m excited to see the future of this team. I’m saying goodbye on the field, but I want to continue to help in any way possible," Lloyd said. "I’m going to be the biggest fan, biggest cheerleader, and I want to see this team continue to succeed."