No punishment for mom whose toddler peed in public

Brooke Johns was cited after her toddler son urinated in a parking lot. Johns, who was nearly nine months pregnant, said the two barely made it to the gas station before she realized he wasn't going to make it inside.

AUGUSTA, Ga. - A pregnant mother who was cited after her 3-year-old son peed in a gas station parking lot is no longer facing possible jail time and thousands of dollars in fines.

The case against Brooke Johns was dismissed Thursday in Augusta, Georgia. Johns was cited for disorderly conduct in March when she was nearly nine months pregnant.

Attorney Ben Allen, who spoke on behalf of the state in court, said the law “didn’t fit” in this particular situation.

"This is a situation where mom was trying to be a good mom," Allen said. "The child had an emergency come up, and Mom took care of the emergency. That's what we expect of all good moms." 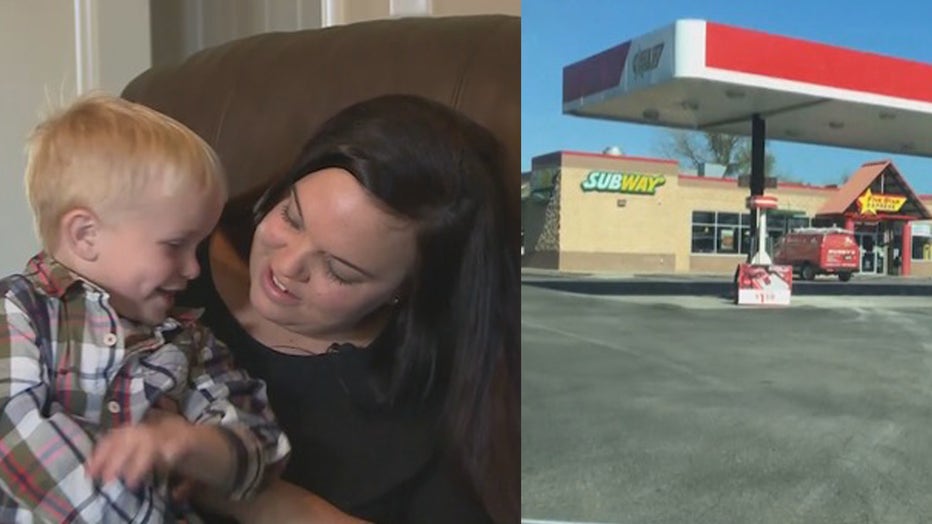 Brooke Johns is pictured with her son, alongside an image of the gas station where the incident took place. (Photo credit: Provided / WRDW)

On March 29, Johns' toddler told his mother he needed to use the restroom. The two barely made it to a gas station before she realized he wasn't going to make it to a toilet inside.

Just weeks from giving birth, Brooke was unable to carry him and said she did what she thought was the next best thing by covering him as he urinated in the parking lot.

"He was peeing before his pants were even all the way down, so obviously he had to go," told WRDW-TV, who lives in Beech Island, South Carolina.

A Richmond County deputy witnessed the incident and cited the mother.

"I said 'Accidents happen." And he was like, 'Take him in the bathroom,'" Johns told the news station. "What if I would have ran in the bathroom and someone had been in there? What I was going to let him do? Pee on the floor of the gas station?"

The deputy wrote on the ticket: “She allowed her male child to urinate in the parking lot. I observed the male’s genitals and the urination. Public restrooms are offered at the location.”

Johns went to court in April to contest the ticket, but the issue was not resolved, according to WRDW. She pleaded not guilty, and her attorney asked for a bench trial.

The citation sparked a lot of backlash on social media from parents.

Johns, holding her 8-week-old daughter, told reporters on Thursday after the case was dismissed that “the support from the community was amazing.”

“I couldn’t be more thankful,” she said.