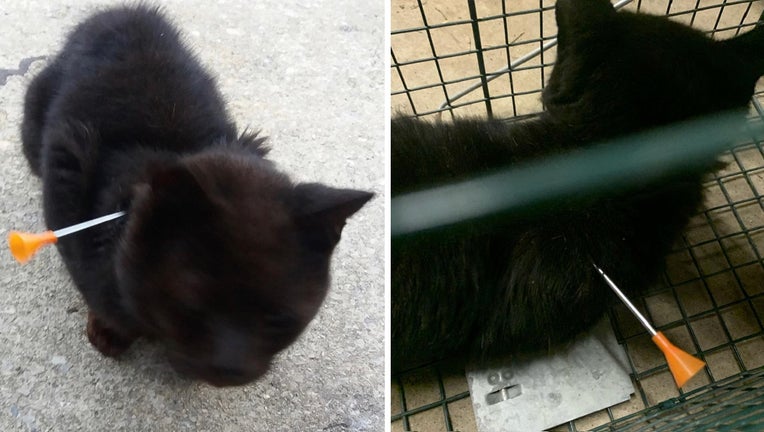 Felix is recovering after rescue officials say he was shot with a blow dart and BB gun in New Jersey. (Freedom Farm Animal Rescue)

PORT NORRIS, N.J. - A cat is recovering after animal rescue officials say he was shot with a blow dart and BB gun in Cumberland County.

On Thursday, the cat was rushed to Freedom Farm Animal Sanctuary, where x-rays revealed he had a herniated diaphragm and old rib cage fractures.

Hospital staff explained that the cat was likely struck by a vehicle, causing the fractured ribs and eventual hernia.

Rescue officials say the cat, now named Felix, is doing “very well” after having the dart removed during surgery.

“This poor cat has had a very rough life,” Freedom Farm Animal Rescue wrote in a Facebook post. Despite his tribulations, though, “he is still willing to nuzzle up against your hand or purr as you pet him.”

“No animal deserves to go through what this poor boy has gone through,” sanctuary officials said, adding that it will do whatever it can to ensure justice for Felix.

Those interested in donating to Freedom Farm Animal Rescue can do so here.