Bear hangs out in Bethlehem pool

One bear wanted a place to cool down.

BETHLEHEM, Pa. - Police say they are warning the public about swimming bare—or “a swimming bear.”

Confused? Just bear with us.

In a Facebook post, Bethlehem police say officers got a report Sunday morning about a young black bear who lost its bearings, going through yards in the area of Cloverleaf Street and Melrose Avenue. 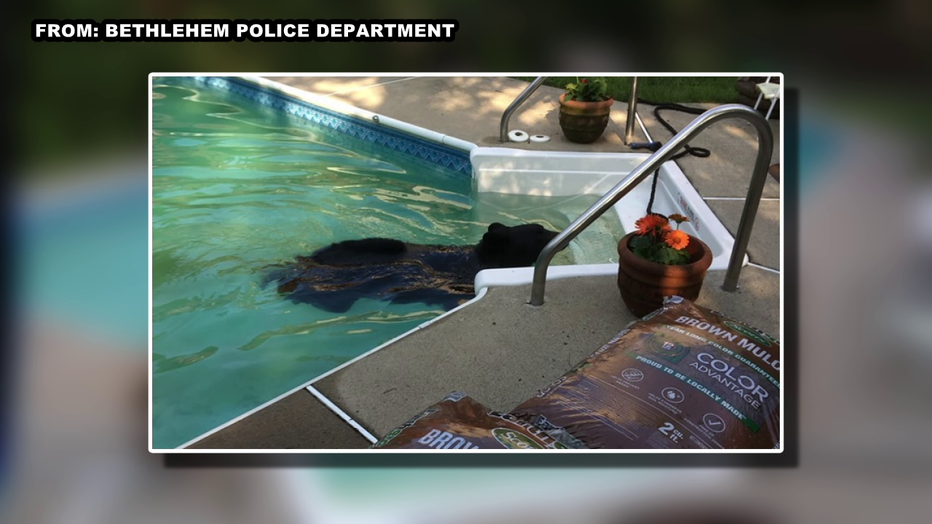 Margaret Buell says she got a call from dispatchers telling her to stay inside her home. At first, she “bear-ly” believed it.

“I saw the cop kind of running, then I looked out the window and the bear was trying to fake him out it seemed like,” she says.

The bear apparently made quite a trip.

Bethlehem’s Assistant Fire Chief, Nolan Rampulla, says his home’s ring doorbell camera caught the bear wandering in his backyard, which is about two miles away.

“That's by far the most interesting thing my ring camera has got so far,” he says.

Police say the bear eventually became hot and decided to take a dip in a nearby swimming pool.

With the help of Pennsylvania Game Commission officers, to prevent what could have been a grizzly situation, police say they corralled the bear into a yard and tranquilized it

Police say the bear was happily relocated to North Central Pennsylvania where it can roam on hundreds of acres.